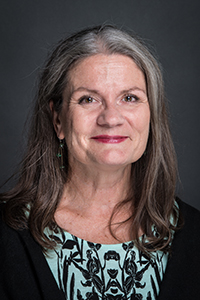 Joy Killough Amel. mezzo-soprano, has taught voice at UW-River Falls since 1996.  She also teaches Diction, Opera Techniques, Voice for the Actor and Solo Vocal Literature. Ms. Amel received a BS degree from University of North Alabama, a MM degree from the University of Alabama-Tuscaloosa and has done doctoral course work at the University of Minnesota.

Ms. Amel sang with the Minnesota Opera ensemble for sixteen seasons. Her forty-odd productions with Minnesota Opera include the world premiere of The Grapes of Wrath (Ricky Ian Gordon), and the American premieres of The Elephant Man (Laurent Petitgirard) and The Handmaid's Tale (Poul Ruders). Her Minnesota Orchestra experience includes three roles in L'Enfant et les Sortilèges (Ravel) and Third Lady in The Magic Flute (Mozart).  Other roles for the mezzo-soprano include Dido in Dido and Æneas, Mrs. Peachum in The Beggar's Opera, the Fortune Teller in the premiere of Eric Stokes' Apollonia's Circus, Second Lady in The Magic Flute, the Mother in Amahl and the Night Visitors, Marcellina in The Marriage of Figaro, and Lucretia in Britten's The Rape of Lucretia.  She has performed as soloist in a wide range of oratorios, from Bach to Honegger, and served as mezzo-soprano section leader and Cantor at the St. Paul Cathedral from 1999-2009.

On a lighter note, Ms. Amel has also worked with Joshua and Joseph Scrimshaw. The Scrimshaws are sketch and improvisational comedians in the Twin Cities. She has appeared with them in a variety of venues, including the Twin Cities Fringe Festival. Her recent theatre experience includes the role of Lenya in Neil Simon's Fools at Theatre in the Round