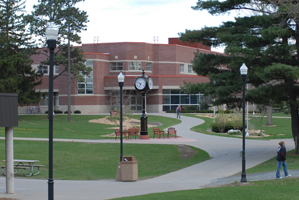 The Walker D. Wyman Education building was dedicated on May 10, 2000, as part of the celebration of the 125th anniversary of the founding of the institution that is now UW-River Falls. The building was opened for the 1999-2000 academic year, but the name was approved unanimously by the Board of Regents on April 7, 2000.

Wyman was a professor of history at UWRF for 41 years joining the faculty in 1932 and retiring in 1978 to emeritus status. He served as president of the University of Wisconsin-Whitewater from 1962 to 1967 before returning to River Falls. During his time at Whitewater, the student enrollment grew from 3,000 to 8,500 and 20 buildings were started or completed. He felt one of his greatest accomplishments there was construction of the campus mall, which was later dedicated to him.

Born on a farm near Danville, Ill., on December 7, 1907, Walker earned the B.A. degree at Illinois State University and the M.A. and Ph.D. degrees at the University of Iowa. He said it was in Iowa that he became interested in individual histories, the stories of lumberjacks, ranchers, farmers, migrants and pioneers. He founded the UWRF Press and contributed many manuscripts to it. His 1979 book Wisconsin Folklore was based on his UW-Extension radio course that was published weekly in 10 Wisconsin daily and 50 weekly newspapers. He was named that year by Gov. Lee Dreyfus as Wisconsin’s first “Honorary Folklorist.” He was a prolific writer and was the author of works on subjects as varied as water witching, wolf and bear stories, mythical creatures, and histories of UW-River Falls and the Wisconsin State University System. Published shortly before his death was his 23rd book, Great Legends and Stories of Mid-America.

At the dedication ceremony Chancellor Gary Thibodeau said, “I have never met a man I have admired or respected more. He was a civil, intellectually honest man.”

UW System President Katharine Lyall said it is unique to have a man leave his legacy on two campuses as Wyman did. “It is rare that two campuses in the university system have both been so deeply impacted by the same person,” Lyall said. “He was a rare, aspiring individual. He lived and wrote the history of this institution, a privilege few people are given.

At the dedication Wyman’s widow, Helen, who illustrated many of his books, said that Walker’s presence was felt during the ceremony. “I feel very strongly that he is here today,” she said. “I believe he is very proud and honored by what is being done.” Helen reported that when Walker first came to River Falls he told her, “I’m not going to stay here very long.”

When Wyman died, Mike Norman of the journalism department marveled at Walker’s accomplishments during a writing and teaching career that spanned more than six decades. “He’s done enough for two or three lifetimes,” Norman said. “He was one of the outstanding historians and folklorists in Wisconsin.”
The Lumberjack Frontier, published in 1968, was widely recognized for its historical and social content. It was selected by the English-Speaking Union for its Ambassador Book List for interpreting “the lives, backgrounds regions and culture of America to the people of other countries.” Choice Magazine named the book to its “Outstanding Academic Book List.”

Walker’s faculty colleagues frequently remarked on his great sense of humor, his talent for telling stories, his dedication to students and his devotion to the campus. At one point in his career, a number of his friends urged him to run for the office of lieutenant governor. He declined by telling the tale of a widow. According to Wyman she had two sons. “The older ran away to sea and was never heard of again. The other became lieutenant governor of a Midwestern state . . . and was never heard of again.”

Among Wyman’s famous mythical creatures were the Dingbat and the Gillygaloo. He wrote of the Dingbat, “This strange creature appears to be a frightening cross between a bird and an animal, having large wings, short antlers, and a short body covered with feathers.” Of the Gillygaloo he wrote, “(It) built square nests on the crest of a ridge or a hill and in them laid square eggs that would not roll down hill. Lumberjacks coveted the square eggs, using them for dice after they had been hard-boiled.”

Walker died suddenly on March 29, 1999, in Green Valley, Ariz., where he and Helen had wintered for a number of years. When he learned of the death, Chancellor Thibodeau said, “He is a person who will not be replaced. There is a great reservoir of love and affection and respect for Walker Wyman on this campus.”