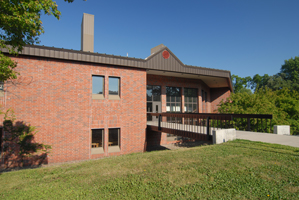 The sciences have always been a significant part of the teacher education curricula at River Falls, partly because of the curricula in Agriculture and in secondary education, but also because of the preprofessional programs in medicine, veterinary science and other fields.

The departments in biology, chemistry and other sciences have been located in North Hall and other quarters from time to time, but not until 1977 did the sciences have a new home when they moved into the Physical Science Building. The $3.9 million building became the new home of chemistry, physics and psychology. The sciences then had classrooms, study and lounge areas, and laboratories with adequate equipment to continue the teaching fields.

At the dedication of the building on April 26-29, 1979, the name was formally changed to Centennial Science Building since its construction had begun in the 100th anniversary of the University of Wisconsin-River Falls. On that occasion, Chancellor Field called the new building “a milestone for the sciences at UW-River Falls, which have always been strong areas of study here.” On this occasion the 22nd Symposium in Chemistry for undergraduates was held, and over the years Centennial Science Hall has been the scene of many conferences in the sciences, various instructional programs, and programs in the observatory where telescopes bring to both students and the public the world “out there.”

When Professor Ed Selden retired in 1986, after a teaching career of 25 years in the Department of Psychology, he said he could look back on a good career teaching students and stimulating some of them to pursue careers in psychology. As chairman of the psychology department he had seen the staff increased from three to nine, offering an increased number of courses for the growth in enrollment.

Dr. Selden grew up in Duluth, attended the University of Wisconsin-Superior, served in World War II and took Master’s and Ph.D. degrees at the University of Minnesota. His chief interest in psychology was in abnormal psychology. Following his retirement he returned to the campus to offer some courses and after the dedication of the Centennial Science Hall, the Ed Selden Lounge was named in his honor.