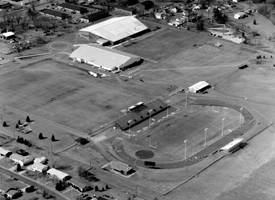 River Falls will always feel grateful to Phillip W. Ramer for the sagacious diplomacy and diligent endeavor through which he is credited with saving the Teachers College for this city and establishing it as one of the leading institutions of its kind in the state. ... To perpetuate this appreciation throughout the years to come, the athletic grounds of the College have been named ‘Ramer Field’ that alumni returning for homecomings, undergraduates watching or participating in College games ... may ever be reminded of the grand old man whose devotion meant so much to the success and progress of the institution and the community.

Born in Lewiston, Minn., in 1859, he had lived in a sod house in North Dakota the first years of his marriage, drove a horse and buggy to town, then became a salesman for Quaker Oats and introduced its products throughout the world. Being a world citizen when he settled down in River Falls in the early 1900s, he played a major role in community life and enjoyed hunting and fishing with his friends.

When he was appointed to the Board of Normal School Regents, he devoted his time and energy to getting appropriations for the Normal School that became a f 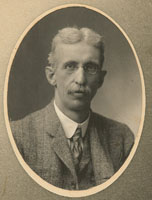 our-year Teachers College. As President J. H. Ames said of him, he had “political savvy to affect the legislature” in appropriations and policies for developing the State College system in Wisconsin. At the community dinner given in Ramer’s honor, Ames said further that Ramer was “a man who was never afraid, never downcast, a man who looked ahead. ... Ramer fought the battle for North Hall in 1914 and won the confidence of the state in the future of the River Falls college.”

It was fitting that his funeral be held in the North Hall Auditorium and that the athletic field be named in his honor.

When the enrollment increased so fast after World War II and space was needed for additional residence hall and food service buildings, additional land was purchased south of the campus and the “old” Ramer Field was occupied by Rodli Commons and other structures. The new Ramer Field now serves the athletic teams and is used for other activities.