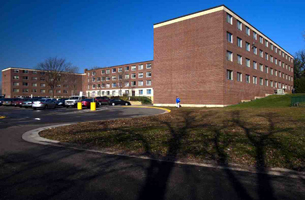 Irma Hathorn would never have said, “It’ll be a cold day in hell,” but the implication was clear when she said, “It’ll be a cold day before this college gets a women’s dormitory.” It was! The cornerstone-laying ceremony was in December 1950. It was snowing and both participants and spectators were bundled in heavy coats. Present were Dean Hathorn, President E. H. Kleinpell, Regent Chalmer Davee and River Falls Mayor H. T. Hagestad.

At the ceremony President Kleinpell said, “I know of no name that would be more fitting ... Miss Hathorn has been untiring in her efforts to keeping the goal alive.”

Miss Hathorn joined the faculty as Dean of Women in 1920 and retired in 1949. She was born in Jamestown, N.D., July 1, 1883, but attended high school in Minneapolis and Buffalo, N.Y. She had roots in Wisconsin, however, for when President Kleinpell asked for her approval of the name “Hathorn Hall” she wrote: “It makes me very happy to know that you plan to name the new dormitory for me. My father was from Wisconsin and his family lived in the state for many years, so I am filled with pride that I am able to give some permanence to the name ‘Hathorn’ in this state.” Her letter continues, “It is just thirty years this fall since I came to River Falls with the hope the girls would have a dormitory in a few years. I am sure that dormitory life will mean much more than the present student body realizes.”

She attended the University of Washington in Seattle for a year and then transferred to the University of Minnesota where she received her B.A. degree in 1907. She taught high school in Canby, Minn., from 1907-10 and at West Central School of Agriculture in Morris, Minn., from 1910-20. In addition to her duties as Dean of Women at River Falls she taught courses in Latin and education. She received her M.A. degree from Teachers College, Columbia University, in 1925. 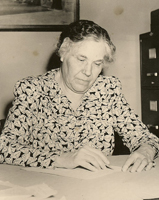 There was a precursor to Hathorn Hall. A house on Fourth Street that had been included in a land purchase was made into living quarters for a dozen or more women and named “Hathorn Cottage.” Marion Hawkins, of the English department, and her mother served as “house mothers.” The cottage was used by several offices on campus before being sold and moved prior to the construction of the new Wyman education building.
When Dean Hathorn retired she said, “There have been many changes during the years I have been here. Some of the most interesting developments in which I have had a part were the beginning of a student activity fee, a student social committee, the Student Senate, the Honor Society, the student health service and Mother’s Day (a day when mothers of students were invited to the campus).”

A 1939 graduate wrote, “My favorite NYA job was acting as student assistant to Miss Irma Hathorn ... Her awareness of students’ needs, her desire to see a dormitory established on this campus, her hobby of foreign travel, her wide reading — all impressed me.” A 1949 graduate who worked her way through college reported that Dean Hathorn always helped her to find jobs and wanted to be sure that they were satisfactory.
Dean Hathorn traveled often during her summer vacations while serving as dean, and she continued to enjoy trips abroad after her retirement. A trip to Nazi Germany in the early years of Hitler’s regime resulted in her being called upon to speak before many groups on the dangers of the Nazi takeover of Germany.

She was a cultured, well-read woman with wide-ranging inerests. In her role as Dean of Women, she voiced special concern for the needs and rights of women students, and she was concerned for their refinement and cultural growht. She was an early feminist in the very best sense of the word. It is interesting that, at a time when sexual equality was not at the forefront of public attention, the first building on campus to bear the name of an individual was named for a woman.