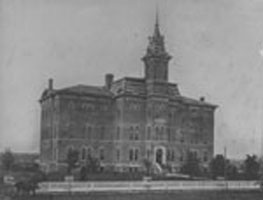 When the fourth Wisconsin Normal School was located in River Falls in 1874, the first building was simply the Normal School or at the dedication it was referred to as a “Temple of Learning.” It was the most important building in a village of 1,200 that had no railroad until later and only board sidewalks down the main street. This “Temple of Learning” had been built at a cost of $51,351 and served those students preparing for teaching in the one-room rural schools.

When the building was destroyed by fire Nov. 29, 1897, only a few things were saved. Helpers carried out the grand piano and a few statues (now preserved in the Archives), including one of Daniel Webster. When the walls caved in, President Parker climbed upon a wagon and shouted, “School will assemble in Thelander’s Hall tomorrow at nine o’clock.” He was answered with a cheer.

Though other cities in Wisconsin sought to “steal” the River Falls Normal, it was rebuilt at its present location on May 20, 1898. At the dedication of the new building there was a joyful gathering of townspeople, faculty and students, and a new president, Warren Judson Parker, was welcomed with speeches and musical events.

An addition was built in the early 1900s, but the name remained the Normal School until the new building across the street was added in 1914. Then the names of South Hall

and North Hall came into existence. South Hall lost its steeple a few years later, but the first janitor, Frank Thayer, continued to sweep the floors, serve as “engineer,” athletic coach, band master and “all-around factotum” for years afterward. More than that, he ran a museum in the engine room where a large brown eagle and two gray owls looked down upon visitors.

In the 1970s South Hall was the focus of a major effort to save the building from destruction. This successful endeavor resulted in its listing on the National Register of Historic Places in 1976 and in subsequent renovations that maintained many of the building’s original features.