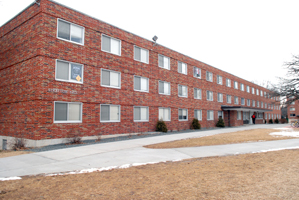 When Dean Charles G. Stratton was asked by students in the early days of his long tenure at River Falls (1915-1950) what his “favorite pet peeve” was, he gave this reply: “Rahs in the Halls for the Team.” Students always came from classes in geography or geology laughing at some of his gloomy humor.

Stratton came to River Falls in 1915 after attending Michigan schools and later was awarded an honorary doctorate by Michigan State College at Ypsilanti. In early days here, according to him, he taught nine classes five days a week in a lecture room that had one table, a few chairs, but no maps or texts. After the Nov. 11, 1918, Armistice of World War I, he took a leave of absence to serve as a cartographer with the Commission to Negotiate Peace in Paris. He played a significant role in establishing international boundaries in Europe at that time. When he returned to River Falls he was appointed Dean of Men, a position that had few duties, he said, except to report student absences.

During World War II, when hundreds of River Falls students and graduates served in the Armed Services around the world, he sent them letters reporting on campus life. In one letter he told that two custodians of North and South Halls had resigned and he was campaigning for one of the jobs. At one time during the war he was sending out letters to hundreds of service men, paying the postage from his own pocket. He helped students on campus to keep the Service Flag that hung on the South Hall wall up-to-date, a star for each soldier, a gold star for those killed in action. After the war he compiled a “Service Man’s Edition” of the Meletean. 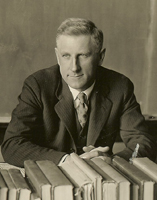 Dr. Stratton found time to serve as weather observer for the U.S. Weather Service, recording temperatures, rains, snows and other weather each day. Citing his 36 years as a weather observer, he reported at a testimonial dinner held in his honor at his retirement in 1955 that his work had been totally useless. He had walked 300 miles from his house to the weather instruments in his back yard and had driven 5,000 miles to mail the daily report at the Post Office, and had never received one cent, only some equipment — a blank weather map, a monthly report sheet and three pencils! He said that President Roosevelt “took away the map, Truman took away the weather report, and Eisenhower quit issuing pencils.”

Though students enjoyed Stratton’s classes in geography and geology, they also enjoyed his gruff humor. They told stories about how he would put a chalk mark over the classroom door when “he caught a student thinking!” Faculty remember his complaints about too many faculty meetings. At one time he was moved to write a poem about this problem and sent it to the President’s office:

My garden is seedless,
My chickens are feedless,
The lawn isn’t mowed any more,
My shotgun is rusty,
My fishing rod crusty,
All pleasures are given o’er.

My suit is unpressed
There are spots on my vest,
There is not time to clean them away.
For time is so fleeting;
I must run to a meeting
My committee is holding today.

When the trumpet has blown
And to heaven I’ve flown
And St. Peter answers the bell,
If he mentions “Committee”
I’ll fly from the city
And purchase a ticket to Hell.

Fortunately, Dr. Stratton attended the dedication of Stratton Hall in 1958 when his idealism, scholarship and humor were recalled, and his friends and former students later established a scholarship in his name.