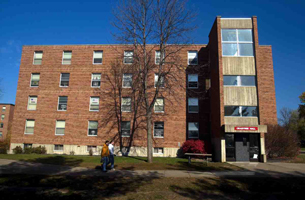 When James W. Crabtree, President of the River Falls State Normal 1911-1917, died in 1945, many educators, former students and others testified that he had made great contributions to the teaching profession. The editor of the National Education Association Journal said he was “a great leader, a combination of Horace Mann and Abraham Lincoln.”
At the time of his appointment as President, the Board of Regents had given some consideration to closing the Normal since the student body was down to 319, although the need for teachers was increasing as the population grew. It was the challenge of increasing the teacher supply that caused him to leave Nebraska where he had held leadership positions in public education.

Crabtree was born on a farm in Ohio, April 18, 1864. There he came under the influence of a great teacher who encouraged him to continue his education beyond the little rural school. When his family moved to Nebraska where land was cheap or free and educational opportunities were limited, they lived in a sod house. Somehow he managed to go to the Peru Normal where he worked for his board and room until he was licensed to teach in the common schools. Soon he became a village principal of schools, then the inspector of schools for Nebraska and from 1904 to 1910 he was President of the Peru Normal where he had once been a student.

As a Normal School President, he brought the best teachers and students there to serve the teaching profession. Many of them soon occupied teaching positions in the schools of the nation beyond Nebraska. It was Crabtree’s reputation for having made teaching a more important role in life that caused the Board of Regents to offer him the River Falls presidency in 1911.

When he arrived in River Falls, he told all who would listen that “We are teaching children to do the work of the house as well as to solve problems of arithmetic and algebra.” The community welcomed him with a special program. The train brought the Hudson band and baseball team down to join the parade on Main Street, followed by welcoming speeches, a picnic and the ball game (which Hudson won 9 to 5). The mayor called the day a “big and delightful success.”

Under Crabtree’s leadership, the Normal School grew in enrollment and in reputation. Although he lived simply, asking only the opportunity to serve, he recruited students by helping them get jobs to earn board and room, added professors who related learning with the improvement of home and community, and helped get appropriations through the legislature for building North Hall. A later President, J. H. Ames, said that Crabtree “will always be remembered at River Falls for his remarkable capacity for meeting students personally and for making them feel his own interest in their welfare.”

It was a sad day when Crabtree left River Falls for a position as Secretary of the National Education Association with headquarters in Washington, D.C. When he retired from that position in 1935 it had become the largest professional organization of teachers in the world and River Falls Normal that he had once led had become a State Teachers College offering a Bachelor’s degree. It was fitting that a residence hall carry his name.