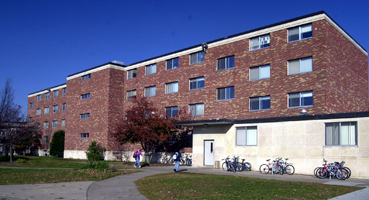 The College of Agriculture is a monument to John M. May more than to any other person. He fought the long battle to strengthen the teaching of agriculture on this campus and held the program together through World War I, World War II and the Korean War. When he retired in 1957, farm organizations far and wide honored him, but none more heart-warming than the testimonial dinner in 1956 given him by the many former students who came from coast to coast to pay tribute to him. They presented him with a bound volume of letters of appreciation, a watch, boxes of cigars, a lawn mower, golf balls and even enough cash to last for years, he said. President Kleinpell said at that time that, "Nothing satisfies an administrator like knowing he had on his staff a man who has done an outstanding job for his kids and community."

John May had grown up on a farm in Nebraska, had a B.S. degree from Kansas College and an M.S. degree from Cornell University. After teaching in high school, he joined the River Falls Normal faculty that had just been authorized to offer a two-year program in agriculture for teachers. He spent his career developing that program beyond teacher education into a number of fields.

In the 40 years he was head of a department, or a division, or a college of agriculture, he became widely known in educational circles throughout the Midwest as one of the early pioneers in preparing teachers of agriculture for Smith-Hughes high schools. He helped take the River Falls agriculture program from zero years to three years to four years, but retired at the time when the fifth year programs came along. He is remembered as an able professor who worked quietly as the director of agriculture on this campus, which graduated hundreds of young people for careers in agriculture.

May was the author of Why Farm Earnings Vary and Problems in Farm Management for Vocational Agriculture Students and other bulletins that encouraged better farm practices, and he lectured widely to farm organizations. He was a pioneer in the teaching field for the improvement of farming through education. But on campus he was a quiet classroom lecturer who frequented the library, served on college and community committees, and in the day when townspeople thought that college professors should not smoke, he pulled down the blinds each evening while he enjoyed his after-dinner cigar!

The 1957 Meletean was dedicated to Professor May. After noting the many tributes that had been paid him, it said, in part, "... the Meletean staff adds a dedication, not only to John May, the man, but to John May, the department head, counselor, friend and 'dad' to more than 840 men trained in his department since 1913."