Bob Knowles had an early taste for government. He was one of a small group of students advocating the establishment of a Student Senate and was elected as a member when it was organized in 1938. Prior to that his only claim to fame, he said, was that, in 1928, as a campus school student, “I climbed through a window at North Hall and became the first to test the swimming hole which was then being filled with dirty, muddy test water.”

He was born just three blocks from campus and, earlier, his family had lived in a house on the site of the present Hagestad Hall. After he finished high school in 1934 he enrolled at River Falls State Teachers College and later wrote, “I’m sure our most vivid recollection is of how poor everyone was. We have learned not to talk too much about it, for later generations simply do not believe us. I guess we really didn’t feel poor at the time, since everybody was in the same boat. I clerked in a grocery store and worked in a filling station for 15 cents an hour.” 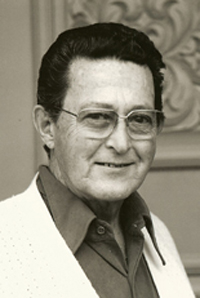 When he was graduated in 1938, teaching jobs were scarce so Knowles said he “drifted” into insurance and real estate sales in New Richmond. This activity was interrupted by World War II and he served in the Army Air Force. When his older brother, Warren P. Knowles, who was serving as Senator from the Tenth Senatorial District was elected Lt. Governor, Bob ran for his seat and won in a special election in 1955. He was re-elected to four-year terms in 1956, 1960, 1964, 1968 and 1972.

In the Senate, he served as assistant majority leader in the 1959 and 1961 sessions and as majority leader in the 1963 and 1965 sessions. He was elected president pro tem. in the 1967, 1969 and 1971 sessions. But his legislative skills took him beyond the boundaries of the state. He was active in the National Conference of Legislative Leaders from the time it was organized in 1959, was elected a director in 1962 and president in 1965. He was a member of the advisory committee of the Eagleton Institute of Politics at Rutgers University and, in 1966, headed a group of four legislators who conducted a 10-day seminar for promising young legislators from the 18 most populous states.

He had a quick wit and a ready sense of humor. During a question and answer session after he had spoken on campus, he was asked, “Why are there so many stupid senators?” He shot back immediately, “There are a number of stupid people in Wisconsin and, under our system of government, they’re entitled to representation, too.”

During the 1960 Republican National Convention he served as assistant housing director and as executive secretary to the arrangements committee for the 1964 and 1968 conventions. He was one of three state legislators appointed by Pres. Nixon to the Advisory Commission on Intergovernmental Relations.
Knowles was appointed to the Board of Regents in 1980 and elected vice-president of that body in 1982. At the time of the Centennial Celebration on campus in 1974-75 he wrote, “It has been with mixed emotions that I have observed the college at River Falls mushroom into a full-blown university campus. While I sponsored and promoted the needed new buildings to accommodate the growth of the school, I fought against its merger into the University System, fearing that for those of us whose eyes get misty on hearing the playing of the pledge song, that some of the special and unique flavor of the school that we knew might be lost in the vastness of the University of Wisconsin.”

Knowles received the “Distinguished Alumnus Award” at River Falls in 1971.
When he became ill, Knowles offered to resign from the Board of Regents but Gov. Earl refused to accept the resignation. Knowles had been the Republican leader in the Senate when Earl was Democratic leader in the Assembly. Knowles died Nov. 3, 1985. At that time Earl said, “He regularly showed me great kindness and was a heavy influence on me.”

Probably State Senate President Fred Risser, a Democrat, best expressed what many felt when he said, “State Senator Bob Knowles was a legislator’s legislator. His imprint can be found on practically all state legislative activities during the 1960s and 1970s. Bob Knowles was a leader, a man of integrity and compassion and a friend to all who knew him.”

Bob Knowles had an exceedingly buoyant personality. He made people feel good just to be around him. Avocationally, he enjoyed both hunting and fishing, and he was an effective supporter of sound conservation practices.

The story is told of the time he submitted a term paper for a history course that he was taking at the college. He really hadn’t done his homework on the assigned topic, so he submitted a paper that started off with two or three appropriate paragraphs, but which then launched into a long discourse on the fine points of pheasant hunting. His professor wasn’t fooled by this and gave the paper an F grade, but he did invite the future senator to join him in a Saturday pheasant hunt!