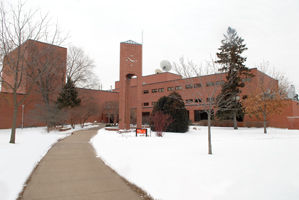 Whether he was at a Board of Regents meeting, talking to an alumni group, on the golf course, conferring with a faculty committee or drinking coffee at O’Brien’s Cafe, President E. H. Kleinpell had one thought foremost in his mind: the future of the college at River Falls. It dominated his every waking moment. Perhaps it even invaded his sleep, for he had great dreams for the institution.

When, in February of 1956, at alumni dinners in Hudson and River Falls, he predicted that enrollment would double in 10 years, many scoffed. Enrollment at the time was 913 students. Ten years later it was 3,281!

In July 1946, Dr. Kleinpell came to the River Falls campus from Valley City (N.D.) State Teachers College, where he had served as president. The enrollment in 1945-46 had been 211 students. The physical plant consisted of North Hall, South Hall, an Industrial Arts Building, the Health Cottage and two barns for the College Farm along with a converted army barracks for married students. He foresaw the return of veterans to the campus and increasing demands on higher education.

When he resigned 21 years later, the enrollment was 3,545, five major academic buildings, nine residence halls and a new heating plant had been added. The college farms had added more than 300 acres. All this had not come easily. But from his own experience, Dr. Kleinpell knew the value of education. Born in Monona, Iowa, the only son of a harness maker and his wife, he attended the University of Iowa to earn his bachelor’s degree. At the University of Chicago he received the master’s degree and, at the University of Ohio, the Ph.D. in history. He was the first president at River Falls to hold the doctorate.

Dr. Kleinpell instituted the general education (later basic studies) program and pushed for the addition of liberal arts courses to the College’s offerings. He arranged for establishment of the Alumni Foundation — a first for a State Teachers College in Wisconsin.

With increasing enrollments, resources were never adequate to meet needs. President Kleinpell would tell legislators, “If you would give me what it costs to build one mile of freeway, I could do wonders.”
He enjoyed working with students and maintained an “open door” policy. Students could see him at any time. He kept a supply of candy bars in his office and pupils from the campus school soon learned of the “open door” and “treats” available. He had many grade school visitors.

One of his favorite quotations was Robert Browning’s, “A man’s reach should exceed his grasp, or what’s a heaven for?” President Kleinpell sought change. He once told a faculty member, “If you have a new idea you want to try, go ahead. If you fall flat on your face, I won’t hold it against you.” To find directions for change, he instituted a “Biennial Survey.” Every two years faculty members were asked to list “strengths” and “weaknesses” of the institution and to suggest ways to build on the strengths and overcome the weaknesses. He read the survey returns carefully.

President Kleinpell contributed to higher education in Wisconsin in more ways than leading the River Falls campus. When the Coordinating Council for Higher Education was established in 1956, he was appointed as the representative of the State Colleges to serve on the joint staff. He gave all his energy to both his job as president and his joint staff position. He served in the latter job for six years without extra compensation.
After resigning at River Falls, he worked for a year as assistant to the president at Nova University in Ft. Lauderdale, Fla., but then returned to River Falls where he wrote In the Shadow, a book recounting the struggles of a small institution to gain funding and recognition when it lives in the shadow of the dominant large state campus. The work was published in 1975.