Ed Prucha joined the River Falls faculty in 1915, teaching bacteriology and, in addition, serving as Registrar from 1924 to 1958. He served during the administrations of three presidents, J. W. Crabtree, J. H. Ames and E. H. Kleinpell.

Born in Mishicot, Wis., in 1887, he received his teaching certificate from Oshkosh State Normal School in 1908. His first teaching job was in a country school in Two Creeks in 1909. He served next as principal of the elementary school in Mishicot and then attended the College of Agriculture at the University of Wisconsin-Madison where he earned the B.S. degree before coming to River Falls and the M.S. while in River Falls.

He enjoyed hunting and fishing and was a familiar figure on the River Falls golf course. He was fond of cigars and particularly enjoyed Harvesters and Dutch Masters products. He loved the outdoors and frequently took his family on picnics during the warm summer months.He was an enthusiastic gardener and supplied family and friends with vegetables and flowers. Many of the older trees still standing on campus were dug up from nearby woods and planted by him. 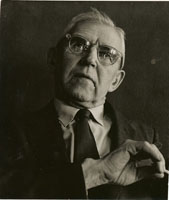 He also is credited with saving the River Falls golf course. In the worst part of the drought of the Dust Bowl years (early 1930s), the fairways on the course were burned brown and the soil was rock-hard. The club’s financial situation was precarious and the Board of Directors was on the point of giving up. Prucha persuaded them that the mixture of Kentucky blue grass and red fescue used on the fairways would come back when the rains returned. The board voted, by a narrow margin, to hang on. When the rains returned in 1937 and 1938 the fairways became green and the course was preserved.

The Prucha home was less than 600 feet from the fire station and Prucha’s son, John, writes of being terrified when the siren sounded in the wee hours of the morning. When his father discovered this, he told John, “Oh, you don’t worry. When the siren wakes you, just roll over and feel the wall next to your bed. If it’s not hot you know that our house is not on fire and you don’t have anything to worry about!”

Prucha was active in civic affairs and served for many years on the City Park Board and the City Hospital Board. He was instrumental in beautifying and enlarging Glen Park and in establishing flower beds in public areas around the city.

Many of the older graduates of River Falls remember the encouragement and, sometimes, financial support which they received from Professor Prucha to enable them to continue their studies. He was skilled in helping students develop latent abilities to thir fullest degree.

After retiring as Registrar at the end of the 1957-58 academic year, he continued to teach half time until ill health forced him to quit at the beginning of Christmas vacation. He died Jan. 7, 1959, at the home of his daughter in Wausau.

Commenting on the loss to the College, President E. H. Kleinpell said, “Ed Prucha is an outstanding example of a man who devoted his life to education and to his students. His counsel and advice will be missed by all of us. Often carrying a heavy administrative and teaching load, he always had time to care about the problems of others and to keep a sense of perspective and a sense of humor. He went out of his way to commend a student or fellow faculty member on any achievement.”