The shadow cast by a pointer or gnomon in sun light has been used to indicate the time for thousands of years. The movement of this shadow is not constant throughout the year and the time so determined can be over 14 minutes ahead or behind the time kept by the best mechanical clocks. This is due to the variation of the speed of the Earth in its orbit about the sun and the inclination of the Earth's axis to the plane of this orbit. The difference between these two times is known as the equation of time.

Another complication is caused by time zones. When the sun passes directly to the south of you, it is noon according to the sun. For someone a few miles to the east of you, however, the sun has already passed through this due south condition. For someone to the west of you, it still has to reach solar noon. Thus, in a given time zone in which all mechanical clocks are supposed to be synchronized, sundials will read different times depending on their longitude. This time difference is usually added to the "equation of time" or it can be built into the sundial by adjusting the position of the hour markers.

The inclination of the Earth's axis also causes the altitude of the path of the sun in the sky to vary periodically throughout the year. This causes the seasons, with the sun being up for longer and higher in the sky during the summer as compared to the winter. Thus, the shadow cast by the Gnomon on a vertical south facing wall will move from west to east during the day as the Earth rotates and the end of the shadow will move up and down during the year as the direction of the axis of rotation of the Earth varies with respect to the sun.

If we connect up shadow positions for the same time each day, we get a figure "8" or analemma while the path of the tip of the shadow for a single day is a hyperbola.

The exact shape of the analemma depends on the time of day. The eccentricity of the hyperbola depends on the date. The shape of both also depend upon the latitude and longitude of the location of the wall. These effects were included in the construction of the Swensen Sundial.

Many sundials approximate the analemmas by straight hour lines and a few sundials include a graph of the equation of time to allow the observer to correct the sundial time to the actual time.

For the Swensen dial, it was decided to mark the hours by analemmas thus allowing the time to be read to about one minute without the need to apply a correction. The finite size of the sun produces a blurred shadow equivalent to two minutes wide at noon and wider when the sun is further from noon. Since only the end of the shadow indicates the correct time, it is important to locate it accurately.

Originally it was intended to use a circular disc with a central hole to mark the time. If you ignore the finite size of the sun and assume the suns rays are parallel, the shadow of a disc whose plane is parallel to the wall will always be circular. Unfortunately the sun's finite size subtending a half degree at the Earth causes shadows to be fuzzy and the shadow of the disc becomes too blurred a few hours away from noon. The shadow of the tube supporting the disc remained clear and so we found that the best indication of this position came with a combination of a polar pointing gnomon and a horizontal gnomon. 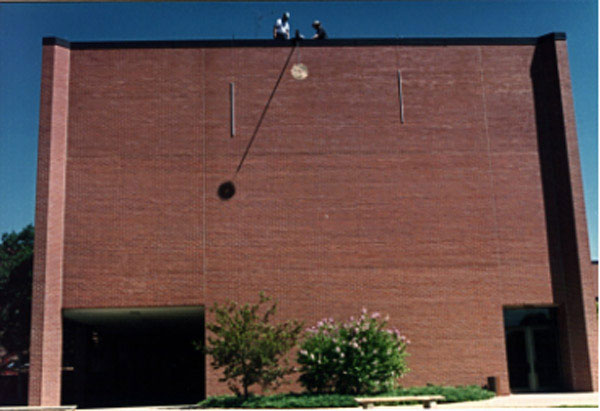 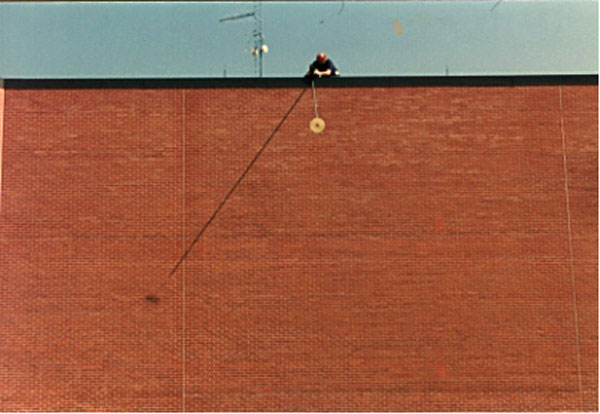 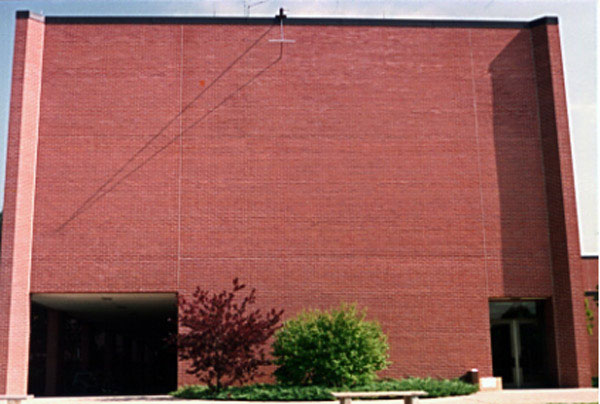 The double gnomon used by the Swensen Sundial.

In addition to achieve this accuracy of ± one minute, it is necessary to know which side of the analemma to use. This depends on the date and thus the analemmas were constructed in two colors.

The section corresponding to the Winter Solstice (December 21) through the Vernal Equinox (March 21) to the Summer Solstice (June 21) has been colored gold while the other half of the analemma (and year) was colored brown. Thus you only need to know which half of the year you are in.

In addition, the eight special days of the megalithic calendar have been marked. These are the two equinoxes and two solstices plus four days midway between these: May day or Beltane; Lammas, Martinmas and Candlemas or Groundhog Day. Since the altitude of the sun oscillates between the two extremes marked by the summer and winter solstices, the paths marked by the six other special days occur in three close pairs. To avoid double daylines very close together, the dates of the special days were adjusted slightly so that a single line could represent Beltane & Lammas and another line Candlemas & Martinmas. The actual dates used in the calculation are shown in the above diagram. The actual dates vary slightly since the tropical year is not a whole number of days (hence the need for a leap year).

As a further guide to the progression of time, markers seven days or a week apart have been placed on the analemmas.

These marks can also be seen on the autumn side of the analemmas in some of the other close ups in the images page. For aesthetic reasons, numbers were left off this sundial. The hours corresponding to the analemas are shown below. The absence of numbers also avoids the difficulties associated with the time change for daylight savings time in the summer.

The sundial was constructed by Gene Olson - Mettle Works of Elk River, Minn. The analemmas are made from 1.25" wide by 0.75" thick aluminum bar. The daylines are 1.25" by 0.5" thick aluminum.