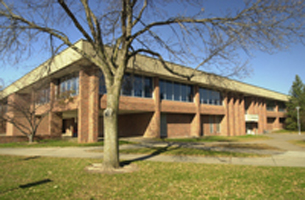 David Rodli was appointed to the Board of Regents in 1959 and was president of the Board at the time of his death in 1965. Gov. Gaylord Nelson saw the State Colleges as regional institutions and broke with tradition when he appointed a regent who was not a resident of the community in which the college was located. “Doc” Rodli (he got the nickname because his father was a physician) was manager of the St. Croix Electrical Cooperative in Baldwin when he was named to the board.

He was born in Albert Lea, Minn., April 5, 1911, and was graduated from the high school there. He attended Juniata College in Huntington, Pa., and served in the U.S. Navy from 1943-1946, nine months of which were in the South Pacific. Returning from the war, he worked two years with the Freeborn County Electrical Cooperative in Albert Lea before being named manager of the co-op in Baldwin.

As a regent, he looked at ways the State Colleges could better serve the young people of Wisconsin. He consistently argued against raising student fees and voiced his conviction that the state should be moving in the other direction, providing educational opportunity for all who could benefit from it rather than only to those who could afford it. He saw education as an investment that paid handsome dividends to the nation. He opposed restricting freshmen enrollments for the same reasons, believing everyone should be given a chance to try.

The respect and esteem of his colleagues on the Board were apparent when they elected him president in 1963. He led a “revolt” of the regents in 1962 but in a quiet, subtle way, so that there’s little evidence that many were aware of it. The issue was a major in journalism at River Falls. 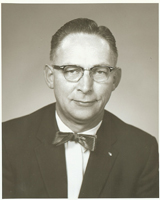 President Kleinpell had become enthusiastic about such a major and apparently had communicated his zeal to the regent. No state college had a journalism major and the only ones in Wisconsin were at Madison and at Marquette University in Milwaukee. When “Doc” learned that the staff at the Director’s Office in Madison was planning to recommend against the major he said some of the bureaucrats had become “too big for their britches.” Obviously, he talked privately with other regents. When he introduced a resolution granting the major at River Falls, one regent voted “present” and all others supported the resolution. Reportedly, it was the first time the Board had overturned a staff recommendation. Rodli also introduced the resolutions for naming May Hall and the J.H. Ames Laboratory School.

Regent Rodli died at his home of a heart attack Feb. 15, 1965, when he was less than 55 years old. In a personal reminiscence, published Feb. 25, 1965, the editor of The Baldwin Bulletin wrote that Mr. Rodli was “deeply interested in education. I got to know and admire him as a man of deep conviction, a most capable and exacting person who wanted to know the ‘why and the where’ of every subject we discussed.” And in The Royal Purple, the student newspaper at Whitewater State College, where he was president, Dr. Walker Wyman wrote, “To this regent ... a campus should be a place where students could learn about all the great ideas. ... Controversial speakers and books enriched campus life, prepared students to live in the real world that is full of controversy. Freedom was an article of faith to David Rodli.”

At the dedication of Rodli Commons, Nov. 17, 1968, Academic Vice President Richard Delorit said, “One did not have to know Mr. Rodli very long to know that he loved life and lived it fully. Although he was aware of his health, he continued to give fully of himself to his profession, to his community, and to his task as a regent.”
In the statewide publication of the Wisconsin Electric Co-ops, Gene Clifford wrote, “Doc Rodli didn’t have many lines in his face, and most of them branched out from the corner of his eyes, the tracks of countless visions of his smile. The lower part of the smile was often wrapped around the end of a pipe and the other part around the eyes which had a mischievous quality that you were never quite sure what it said. For each of us, perhaps he held something behind that smile and as he took it out the door we thought that maybe next time we would find out just what it was and he looked forward to meeting you again on the day quite unlike the winter day of interment in Baldwin.”

After completion of the University Center in 2007 and the move of food services out of Rodli Commons, the name was changed to David Rodli Hall.