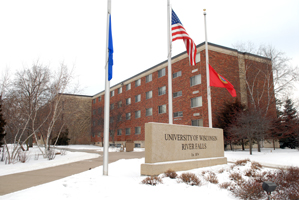 “If I could rate the many teachers I have had in the past, your name would be at the top of the list.”

“You were a regular fellow as well as a good teacher.”

“A man who has been and still is a great inspiration to many.”

“I was always amazed at your wealth of knowledge....”

“A good teacher, lots of humor, but tough.”

“You were a demanding teacher with high standards.”

“Without your encouragement I would never have attained my goals.”

Thus did the hundreds of students who were graduated from UWRF College of Agriculture over the years write of Professor A. N. Johnson when he retired in 1960 after a career of 41 years. Johnson had grown up on a Wisconsin farm, was graduated from the University of Wisconsin-Madison (B.S.) and Iowa State College (M.S.), taught high school, served in the Artillery as a lieutenant in World War I and then joined the staff of the Normal School at River Falls. River Falls had just been authorized to establish a department for teaching agriculture and Johnson became the manager of the embryonic farm that was to serve as a laboratory.

After buying a few good cows, a milk bottling shed was set up and bottled milk was delivered with a push cart by students, making the farm self-sufficient. In time milk was delivered by a horse-drawn wagon. “Old Bill,” the horse, was trained so that he knew every stop, street and alley. Johnson wrote that Old Bill was retired after 20 years to spend his final days in the university pasture. When he died the students held a combined memorial service and commencement in North Hall. A B.S. degree was awarded Old Bill posthumously and in the eulogy, Professor Johnson said it was the first time the university had granted a degree to a whole horse.

The milk produced on the college farm under Johnson’s supervision was not pasteurized, although milk sold in local grocery stores was. This required the closest kind of management of the dairy processes to ensure the purity and safeness of milk delivered to the dairy’s customers. The confidence which customers had in this “raw” milk was testimony to the confidence which they had in Professor Johnson’s integrity and management skills.

Johnson lived to see a vast expansion of the university farm and approved of its development. “To me,” he said, “the new farm is a long-looked for improvement, but it comes at a time to make me a modern Moses. I am too late to enter the promised land.”

Although Professor Johnson was too late to enjoy seeing the College of Agriculture become a well-known center for students in all aspects of agriculture, he did leave behind an annual scholarship for a student to study in that field. There are hundreds of former students who give him credit for launching them on significant careers.