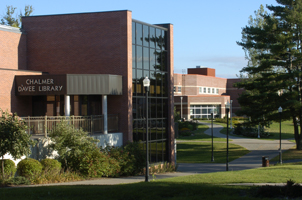 Chalmer Davee recalled the day he first arrived on the River Falls campus. His father had been appointed Superintendent of the Training School Department in the fall of 1917 but the rest of the family was unable to relocate immediately.

He wrote, “... I arrived on my fourteenth birthday, on Nov. 19, 1917, about mid-semester, and, with my first pair of long pants, I met my first class on the following Monday. The class was a mixture of Normal High School students, S.A.T.C. (Student Army Training Corps), and regular two-year Normal School students. For some time prior to my arrival at River Falls, my goal had been to become a physician and I took all the math and science courses available.”

He recalled that before enrolling in the Normal School for the two-year teaching degree, “I milked half the dairy herd daily during the summer of 1919 for my spending money that year.”

After completing the two-year math and science courses in 1922, he taught high school in Three Lakes and Neillsville, but his goal of becoming a doctor remained. He spent two years on the Madison campus and then enrolled in the Medical School at the University of Minnesota where he earned his M.D. degree in 1929. He first practiced in Montana but returned to River Falls in 1930. Along with his private practice, he became team physician at the College and had close and lasting contacts with the school from that time until his retirement. He served in the U.S. Navy during World War II. 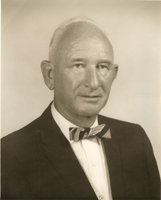 Appointed to the Board of Regents in 1945, he was the first to suggest that the word “teachers” be dropped and that the colleges be authorized to offer the liberal arts degree. He worked hard in pursuit of that goal and was successful in 1951. He was also instrumental in seeing that the River Falls campus got a share of the substantial building program. A new Industrial Arts building was added along with the first two major buildings in 25 years — Hathorn Hall and the library.

When the Board of Regents unanimously accepted a resolution that the new library be named “The Chalmer Davee Library,” President Kleinpell wrote to Dr. Davee, “I hope it recognizes in some small way what you have done for the college at River Falls. It is my firm conviction, and one shared by the faculty, that you have contributed much to the stature of higher education in Wisconsin in general and to this college in particular.” When he left the Board of Regents, plans already were on the drawing board for a new health and physical education building.

The 1953 yearbook was dedicated to the Regent and the editor wrote, “We hope that by dedicating the 1953 Meletean to Dr. Davee we may express in another small way our appreciation for what Dr. Davee has done for River Falls and for us, the student body.”

Dr. Davee left private practice to join the staff at the Veterans Hospital in Biloxi, Miss., and then went on to become administrator of similar hospitals in Marion, Ill.; Hot Springs, S.D.; Columbia, S.C.; and Phoenix, Ariz. He retired to Sun City, Ariz., where he died on June 3, 1983.

He had lived to watch the seeds he had planted grow and flourish. The institution had become the University of Wisconsin-River Falls. It offered not only the liberal arts courses, for which he had fought, but advanced degrees. The health and physical education building, in the planning stages when he left the Board of Regents, was completed and now complemented by the Hunt Arena. A student center and Rodli Commons stood on campus. In addition to Hathorn Hall, there were another eight residence halls for both men and women.

In 1997, following a 21-month-long remodeling project, the library was rededicated in the name of Dr. Chalmer Davee. The building now includes a three-level entrance with a lobby area on each level, additional study space, additional shelving for book and periodical growth and a number of group study rooms. The project also added compact storage areas and an electronic bibliographic instruction classroom to the library. Also, Davee Library is now home to such services as the Academic Success Center, the Writing Center and Information Technology Services, including five computer labs.

In addition to the library rededication, the ceremony included the naming of two rooms as memorials to past UW-River Falls staff members. The Red Computing Laboratory was dedicated to Dan Lunderville, who worked as a senior information processing consultant in Academic Computing until his death in 1995. Lunderville worked to establish the original Red Lab in North Hall and maintained and connected it to the campus network and the Internet. He served as chair of the Academic Staff Council and received the Chancellor’s Award for Excellence in 1987, the university’s highest recognition award for professional staff.

The Richard A. Cooklock Room was dedicated to the former Chalmer Davee Library director, who served in that position from 1954-1986. Cooklock was graduated from Milwaukee West High School in 1942 and served in the army for three years. His service ended in Italy with a gunshot wound so severe that medica abandoned him to treat a comrade deemed more likely to survive. He saved his own life by crawling to an aid station. After the war, he earned a bachelor’s degree in English literature and another in Library Science. He came to the River Falls State Teacher’s College in 1952 and organized the “student bucket brigade” to move books from South Hall to the new building. He retired in 1986 and died suddently on March 7, 1992. The room named for him was the original entrance to the Library and is available for use by the university community.

Another addition to the library included a light sculpture hung from the ceiling in the main entrance. “Sky Garden (A Zen Garden in the Sky),” was created by artist Ray King, of Philadelphia, Penn.