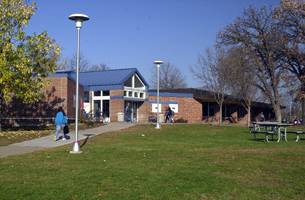 Herman T. “Bill” Hagestad was born in River Falls March 16, 1908, and attended the local grade school and high school. He spent 1926-29 at the River Falls State Teachers College and then enrolled in the College of Engineering at the University of Wisconsin in Madison where he received the B.S. degree in Civil Engineering in 1932. In both high school and the Teachers College he excelled in football and track and had a deep interest in music.

Immediately after receiving his bachelor’s degree, Hagestad took a position with Starbuck Construction Company of Starbuck, Minn., where he remained for two years before returning to River Falls. He became an officer in the National Guard and, during World War II, served as a captain in the U.S. Army, most of the time as Medical Inspector at Ft. Benning, Ga.

After the war he returned to River Falls and resumed his practice. With a partner, he was responsible for the design of countless municipal buildings and projects, power developments and other engineering services throughout northwestern Wisconsin. He was city engineer in River Falls for many years and a consulting engineer for the cities of Amery, Hudson and Ellsworth. He promoted the construction of, and then designed, the first sewage disposal plant in River Falls. This was an important first step in cleaning up the severe pollution of the lower Kinnickinnic River. He served as mayor of River Falls from 1940-43 and from 1950-52.

In 1953 he was appointed to the Board of Regents by Gov. Walter Kohler and he enjoyed his many associations in that role and the opportunity to serve the State College System. It was while he was a regent that the Student Union was constructed and he used his engineering skills to suggest economies that made the funding for the building go considerably further than was originally foreseen. He served on the Board’s business committee and was active in the rapid building program of the State System.

He was a member of the River Falls Volunteer Fire Department, of the American Legion and of the 40 et 8. He also was active in professional societies and had served as president of the Northwest Chapter of the Society of Professional Engineers, as the Society’s state legislative chairman and on its state board of directors.
He was still serving on the Board of Regents at the time of his death, Jan. 28, 1959. He died suddenly of a heart attack while talking with workmen at the new post office (now the city building) at Elm and Second streets.

At its Feb. 19, 1959, meeting, the Board of Regents passed the following resolution:

Resolved, That whereas Herman T. Hagestad, who died on January 28, 1959, at River Falls, served as a member of the Board of Regents of State Colleges since 1953, during which time he was selected as chairman of the business committee, and

Whereas he was an alumnus of the college at River Falls, later sending his children to the college, and
Whereas he had an avid interest in the improvement of the college in buildings, curricula, faculty and students, seeking always to provide in northwestern Wisconsin educational opportunity of the highest type, giving generously of his time, talent, and boundless energy in service to the community and to the future welfare of the entire state,

Therefore, Be It Resolved, That the Board and the Council of Presidents join his many friends on the college faculty and in the community in this expression of deep regret at the loss of Mr. Hagestad’s services in higher education and to the city of River Falls. The Board further regrets the loss of the wise counsel and good fellowship of this highly esteemed member and expresses its sincere sorrow and sympathy to Mrs. Hagestad and other members of the family.