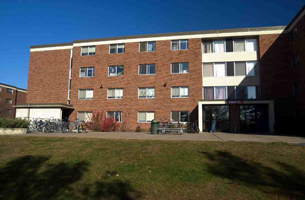 If Judge Jay Grimm, who served on the Board of Regents of the State Teachers Colleges, had been alive in the fall of 1966, he would have rejoiced to witness the construction on the former Ramer Field and the emergence of a residence hall that was named in his honor. Over the years he had always invited a few faculty to his home to observe New Year’s Day. As they drank egg-nog and sang “Was ist das, eine Schnitzelbank?” from a guide on the wall and “Auld Lang Syne,” they talked of the long history of the local college. He had served on the Board of Regents for 13 years and had labored long and hard in seeking appropriations for new campus buildings and for increasing the programs offered.

Attorney Grimm, born in 1878, had attended the common schools and having no college to attend in Northwestern Wisconsin, had “read law” with a River Falls attorney and then joined that law firm. Later, he founded an insurance company that dealt largely with mutual companies serving local governments in Wisconsin. Despite his busy schedule he enjoyed duck hunting, but was a “gentleman hunter,” meaning he didn’t go out at 4:30 in the morning. In 1941 he became Pierce County Judge and served until his death in 1955.

In the years when he was deeply involved in the insurance business in Wisconsin and serving as a judge, he had a reputation throughout the state and served on numerous committees, statewide as well as in this part of Wisconsin. As a regent seeking appropriations for residence halls and academic buildings for the River Falls campus, he was widely known to “carry a lot of water” among legislators. He knew the need of residence halls since he had two children go to college at River Falls who often brought their friends home with them. He

knew that students of the region needed additional living quarters and academic programs. That is why he would have sung loudly on New Year’s Day in 1967 if he had been alive for he could have pointed with pride to the dormitory named in his honor and to other strengthening of the State College at River Falls.

A scholarship to perpetuate the memory of Regent Grimm’s contribution to this university has been established by his family and friends, to be awarded to a pre-law student. However, Grimm Residence Hall stands as a monument to his dedication that will always serve the hundreds of students who attend the UW-River Falls.