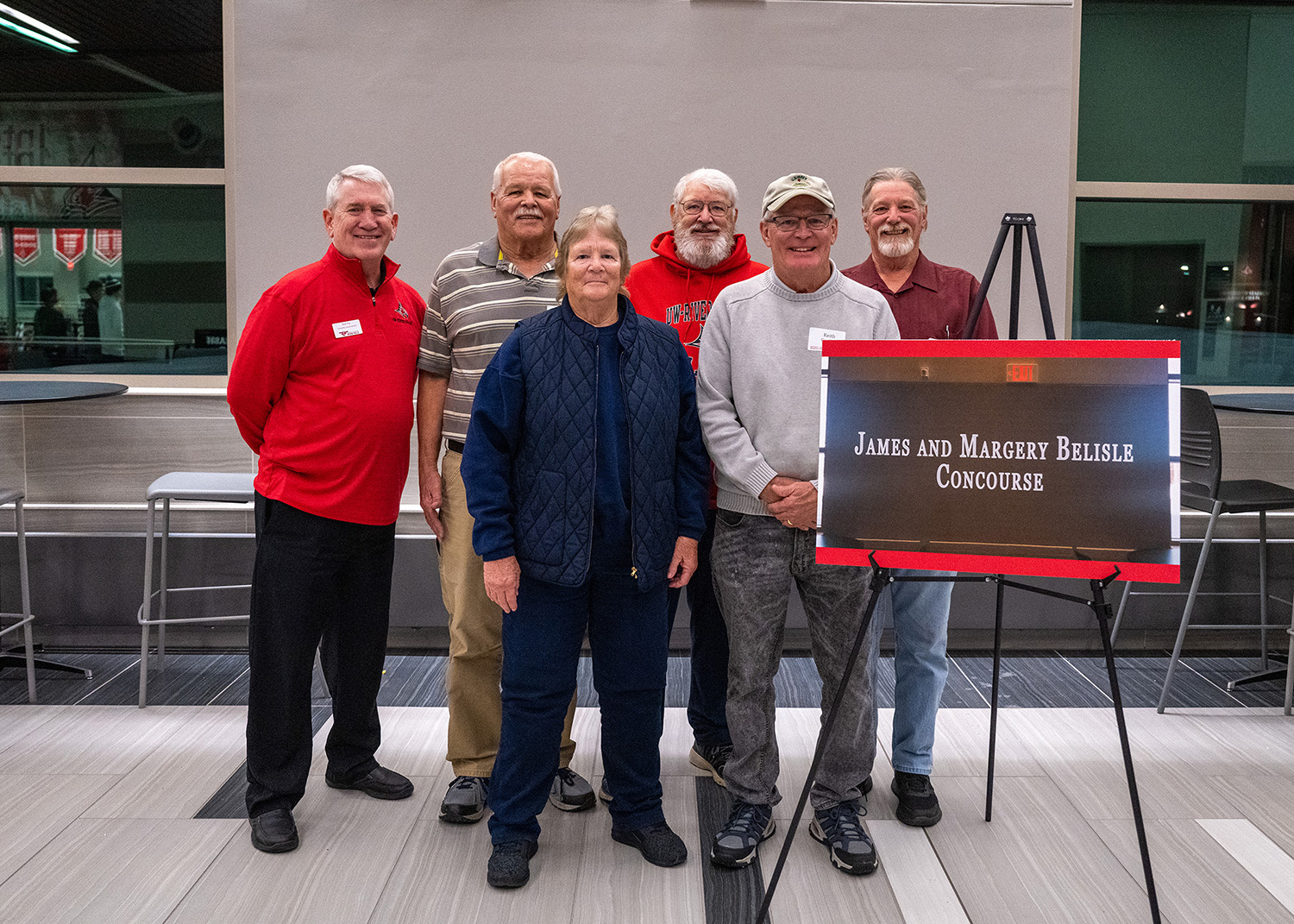 The upper level of UWRF's Falcon Center, through which nearly all Falcon fans pass to attend home basketball and hockey games, will now be known as the James and Margery Belisle Concourse, following the 1954 graduates' $250,000 gift to the UW-River Falls Foundation. The couple wasn't able to attend the dedication ceremony but the Belisles' nephews and niece represented the family. From left: UWRF Assistant Chancellor for University Advancement Rick Foy and family members Craig, Jean, Lynn, Keith and Rich Geurkink.

Dec. 6, 2022 – From the time they arrived on the campus of then Wisconsin State College-River Falls in the early 1950s, James and Margery (Deans) Belisle made names for themselves as popular student leaders. More than 70 years later, their names take on new prominence at their alma mater.

As a result of the Belisles’ $250,000 gift to the UW-River Falls Foundation, the upper level of the Falcon Center, through which nearly all Falcon fans pass to attend home basketball and hockey games, will now be known as the James and Margery Belisle Concourse. The dedication came during a Saturday afternoon reception and brief halftime ceremony at the UWRF men’s basketball team’s game against UW-Whitewater on December 3, which was also Jim Belisle’s 90th birthday. 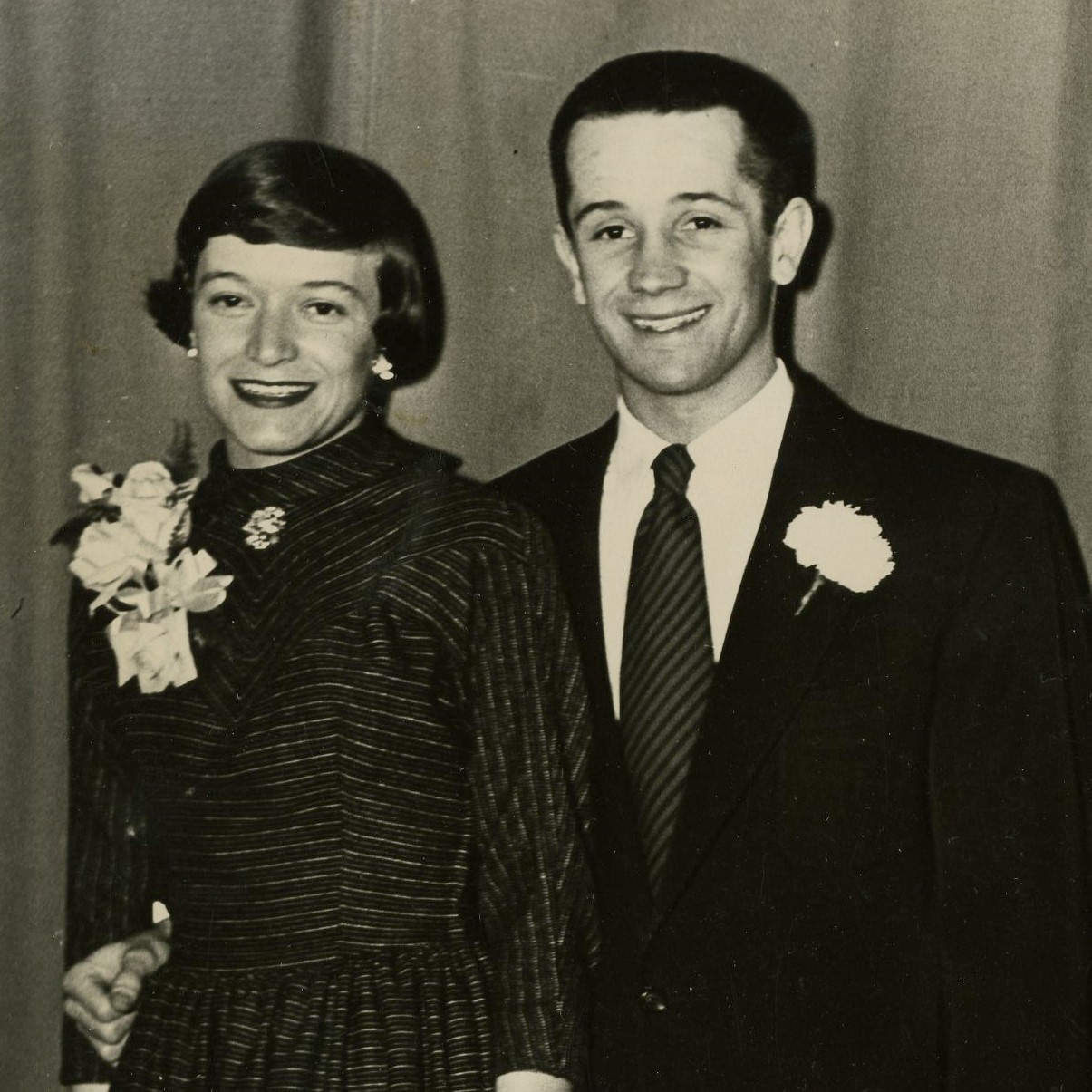 “We had such a wonderful experience at River Falls and are forever thankful for the opportunities the university provided,” Jim said. “Both Marge and I have been reflecting on many special college memories. We really felt it was time to give back to a place that changed our lives and meant so much to us.”

Jim and Marge, both 1954 graduates, started dating as sophomores and made an impact on campus. Marge, who grew up in Hammond, was the first female elected as president of the student senate. Jim, originally from Menomonie, was a sparkplug guard on the Falcon basketball team led by the legendary Roger Kuss which qualified for the 1953 NAIA national tournament in Kansas City. They were chosen king and queen of the college’s Winter Carnival celebration and Jim was honored as outstanding senior athlete.

Marge earned a bachelor’s degree in English and history education and taught high school students in Minneapolis, Fort Hays, Kan., and Bloomington, Ind., before influencing the lives of hundreds of student athletes as a long-time academic advisor at Indiana University.

Jim earned his degree in social sciences. After serving in the U.S. Army, Jim went on to earn his master’s degree and Ph.D. at Indiana University’s School of Health, Physical Education and Recreation (HPER), the first school of its kind in the country. For several years, he served on the faculty of Fort Hays State University before returning to Indiana University to serve as a long-time HPER professor and assistant dean. He is now associate professor emeritus in IU’s School of Public Health. 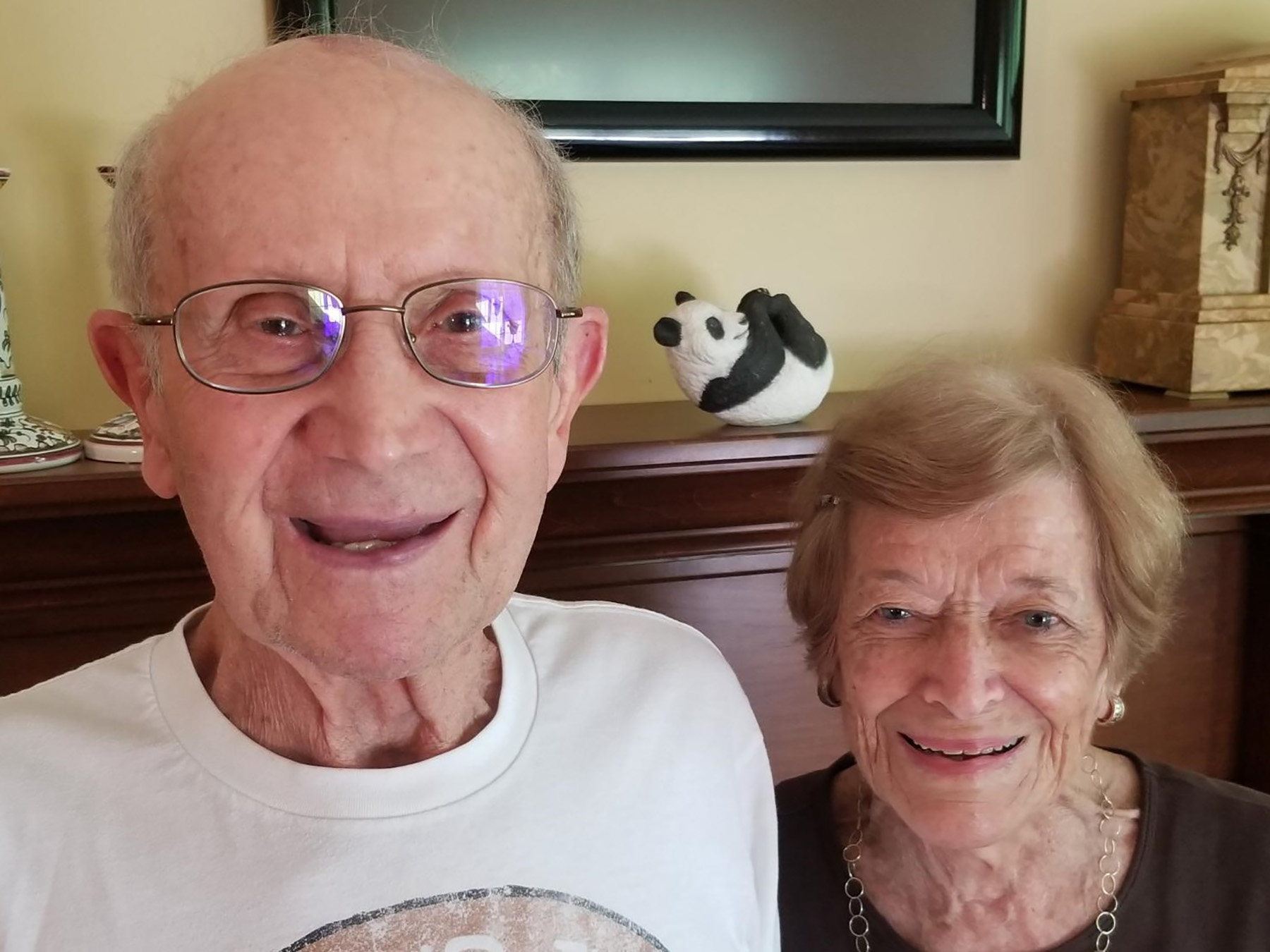 “We thank the Belisles for their extraordinary gift in support of academics and athletics,” said Rick Foy, UWRF assistant chancellor for University Advancement. “Jim and Marge are remarkable Falcons, and it is truly fitting their names will live on at UWRF in a place of such prominence. Their impact, which was first felt here more than 70 years ago, will live on.”

“We hope our support helps provide students the same meaningful opportunities we experienced during our years at River Falls,” Marge said.

For more information or to explore other naming opportunities, contact Foy at richard.foy@uwrf.edu or 715-425-4291.