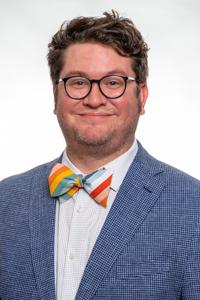 Erik's research is wide-ranging, but primarily focuses on disability, trauma, addiction, and religious experience in American fiction and creative nonfiction. His work has appeared in The F. Scott Fitzgerald Review (Penn State University Press) and Let Us Now Praise Famous Men at 75: Anniversary Essays (University of Tennessee Press). A member of the 2020 cohort of the American Examples workshop, a working group aimed at scholarship in American religious history and sponsored by the Henry Luce Foundation, Erik has a forthcoming essay, which focuses on the influence of psychedelia in American religion in the workshop’s second volume of essays, and he will be a co-editor of Volume 3.

A native of the Twin Cities, Erik is grateful to return to the upper Midwest as an educator at UWRF.