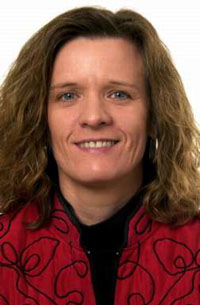 Dr. Patti Cudd is active as a percussion soloist, chamber musician and educator. She teaches 20th Century Music, Introduction to Music, Applied Percussion and conducts the Percussion and New Music Ensembles at the University of Wisconsin-River Falls. Dr. Cudd is also an active performing member of the new music ensemble Zeitgeist. Other diverse performing opportunities have included Sirius, red fish blue fish, CRASH, the Minnesota Contemporary Ensemble, SONOR and such dance companies as the Minnesota Dance Theater and the Borrowed Bones Dance Theater. She received a Doctor of Musical Arts Degree in Contemporary Musical Studies at the University of California studying with Steven Schick, Master of Music Degree at the State University of New York at Buffalo where she worked with Jan Williams, undergraduate studies at the University of Wisconsin-River Falls and studied in the soloist class with a Fulbright Scholarship at the Royal Danish Conservatory of Music in Copenhagen, Denmark.

As an active performer of the music of the 20th and 21st centuries, Patti has given concerts and master classes throughout the United States, Asia, Mexico and Europe. She has participated in such festivals as the Bang on a Can Festival at Lincoln Center, Frau Musica Nova in Cologne, Germany, Mexico City's Ciclo de Percusiones Series, The North American New Music Festival, June in Buffalo, SEAMUS National Conference, The Mirror of the New, Los Angeles Philharmonic's Green Umbrella Series, New Progressions Series, Copenhagen Composers' Biennale, Nove Hudby Plus Festival in Brno, Czech Republic and the Festival Cultural Zacatecas.

As a percussion soloist and chamber musician, she has premiered over 150 new works and has had the opportunity to be involved in a number of recordings found under such labels as Hat Hut, Bridge, New World, CRI, Innova, Emf Media and Mode. Patti is a Yamaha Performing Artist, an endorser of Sabian Cymbals and a member of the Vic Firth Education Team.