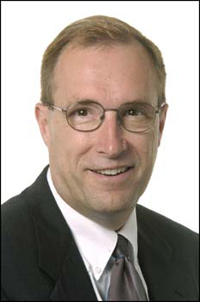 UW-River Falls Admissions Director Alan Tuchtenhagen has been selected to receive the 2004 Chancellor's Award for Excellence for Academic Staff, in recognition of excellence in his work and dedication to the University community. Interim Chancellor Ginny Coombs will present him with the award at a reception on Tuesday, April 13, beginning at 7 p.m. in the River Room of Rodli Commons.

Tuchtenhagen said he was surprised about receiving the award. "I had no idea that I had been nominated," said Tuchtenhagen. "It was very gratifying to me that the nomination came from a group of senior faculty members. I am very appreciative of their kind thoughts."

Several nominating faculty commented on his commitment to the University. Terry Ferriss, professor of plant and earth science, said Tuchtenhagen's office is one of the "most professional and user-friendly" offices on campus. "Students love to work for the admissions office," she said.

Others cited his professionalism as well. "Having worked with Alan during all summer registrations for many years, I have personally witnessed his enthusiasm, professionalism and regard for colleagues, students and their parents," said Nan Jordahl, associate professor of communicative disorders and director of faculty and student academic support programs.

Douglas Johnson, biology professor and assistant dean of the College of Arts and Sciences, notes Tuchtenhagen's service to the campus as a member of Faculty Senate and the Academic Staff Council. "Alan has been a significant contributor to many areas of university life, always willing to serve effectively on various committees and task forces," he said. "And in the face of changing enrollment demands and requirements, he has been creative, innovative and remarkably effective."

Since 1986, Tuchtenhagen has served as admissions director at the University. His responsibilities include supervising student enrollment-related functions and serving on the University Enrollment Management Committee, coordinating both institutional and UW System enrollment objectives. He is also responsible for international student admissions, multicultural outreach and long-range enrollment forecasting.

Coombs cites Tuchtenhagen's "can-do" attitude. "Alan is not afraid to take on a challenge," she said. "In the spring of 2001 he responded to a request to recruit and admit more students who would pursue high-tech majors such as computer science and information systems and biotechnology, and he was successful. He's a can-do professional. And with good humor, he manages situations such as when prospective students and their families get parking tickets when they don't park in designated spots, or when a heavy snowfall covers the grounds on the day of a scheduled campus visit."

Tuchtenhagen received a B.S. in history from Westmar College in Le Mars, Iowa, and a M.A. in American history from the University of Nebraska. He earned a Ph.D. in Public Administration from Hamline University.

In 1992, he received a Bush Foundation Leadership Fellowship to attend the Minnesota Management Institute at the Carlson School of Management and in 2001 attended the Harvard University Institute on College Admissions and Enrollment. He is the president for the Wisconsin Association of Collegiate Registars and Admissions Officers and is the Wisconsin representative to the ACT National Board.

He is a frequent presenter at professional educational organizations for enrollment planners and high school counselors such as the National Association of College Admissions Counselors and the American Marketing Association.

He is a past committee chair for the Boy Scout Troop 54 and is the citizenship merit badge counselor for four area troops. He also serves on the First Congregational United Church of Christ Senior Pastor Call Committee.

Before coming to UWRF in 1986, Tuchtenhagen held numerous academic and support positions that include the coordinator of pre-enrollment service at Iowa State University; assistant director of admissions at the University of Montana; associate, assistant and acting dean of students at Westmar College; and admissions counselor at Midland Lutheran College. He also was a field representative for U.S. Sen. John Culver in the late 1970s.

Tuchtenhagen credits his professional staff's role in receiving the award. "An award like this is only as good as the staff that surrounds it," he said. "I have an absolutely wonderful staff."