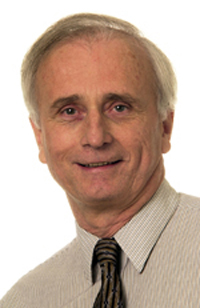 The director of student life operations at UW-River Falls has been named the recipient of the Chancellor's Award for Excellence.

Bob Sievert, who is a resident of Roberts, was named as the recipient by Chancellor Ann Lydecker at an awards ceremony on April 23.

The Chancellor's Award for Excellence is presented annually to a non-instructional academic staff member who has made an outstanding contribution to the University. Nominations come from faculty, students, and staff.

In announcing the award, Lydecker noted: "For 30 years, Bob Sievert has been a true leader on campus. He is bright, energetic, inclusive and extraordinarily effective in all of the many critical tasks that he performs. Throughout all of that, Bob is always seeking new ways to help our students with their experiences here on campus, and he has always been a tremendous mentor who actively develops the new professionals who are assigned to his service area.

"Throughout his tenure, Bob has always been a role model. This award is a way of formally acknowledging what we all know about his exceptional performance."

Sievert came to campus as a student in 1969 after completing a four-year tour of duty in the U.S. Air Force. He began work as a resident assistant for two years, and then we hired as a full-time staff member in February of 1972. Since then he has assumed responsibilities as the facilities coordinator of the Hagestad Student Union, oversight of food services, intramurals and as the Interim Associate Dean of Students.

While working full time, Sievert completed a master of science in education from UW-RF in 1988, specializing in supervision and instructional leadership. With those new skills came new responsibilities: Conferences and Events and the oversight of the Hunt Arena and the Knowles P. Knowles Physical Education and Recreation Center.

In 1996, Sievert was named the director of a reorganized Student Services Center. In his current position he oversees UW-RF facilities' budgeting and operations for food service, UW-RF's nine residence halls, the Intramural Recreation Complex, Hunt Arena, the Knowles Building, as well as the Hagestad Student Center.

Presently, he is taking a lead role in guiding the University's Student Union Planning Committee that is developing the design and program documents for a new $28.4 million student center. Groundbreaking for that building is expected in 2003. Sievert also is extensively involved in the planning of a new $10 MORE million residence hall and a new daycare center, which will both begin construction this year.

Assistant vice chancellor Mary Halada, who was among those who nominated Sievert for the award, noted: "His foresight, and his broad understanding of facilities, statistics, finances and the needs of the students have been invaluable to us as we plan for the future of this institution."