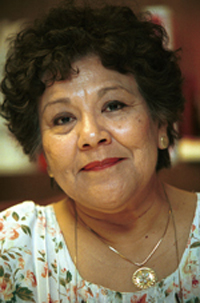 Mary Augustine has received the UW-River Falls 2000 Chancellor's Award for Excellence, which is presented to the top professional member of the academic support staff.

Augustine, who will be retiring at the end of July, has been a vital part of the University for 32 years. She served as bookstore manager for her first 25 years, and spent the rest of her time as head of interlibrary loan at Chalmer Davee Library.

"I couldn't believe I had won this award; I didn't even known I was nominated," Augustine said. "It came as a shock and total surprise."

Chancellor Gary A. Thibodeau had flattering compliments for Augustine. "Mary has served the entire University in the most exemplary manner," Thibodeau said in announcing the award. "Her knowledge, competence, and commitment to this University are to be commended."

The Chancellor's Award is given annually to a non-instructional academic staff member who has made an outstanding contribution to the University. The University has a committee composed of faculty and staff to decide whom to nominate for the chancellor¹s approval.

The chancellor¹s office received many letters in support of Augustine¹s nomination. One letter praised Augustine¹s work and felt her fondness for books never went unnoticed. The letter described Augustine as a "person who is prepared to go beyond her job description in her love of books and culture of the mind."

Another letter of support described Augustine¹s attitude toward her dedication to her work, saying, "Her attitude always expresses a kind of joy in being supportive, in meeting the challenge of a difficult find."

Augustine, who many staff members consider "the heart of the library," said interacting with students is the best part of her job. "I have seen a lot of drama go through this office," Augustine related. "I¹ve seen it all, from students beaming with sheer joy to students showing tearful gratitude for getting the research material they needed to complete their papers or projects."

Augustine has enjoyed reading and writing since she was a young, and landed the job of her dreams when becoming head of interlibrary loan.

"When I became head of interlibrary loan, I thought I had died and gone to heaven," Augustine exclaimed. "I was surrounded by books, and became part of a challenging and gracious department of the library."

Augustine is a member of the Wisconsin Library Association and in 1998 became chair-elect of the interlibrary loan roundtable, and chair in 1999. "I feel so fortunate to have been able to assist patrons in their search for information," Augustine said.

As she prepares for retirement, Augustine praised her co-workers who she has grown to know and appreciate through the years.

"I have had very wonderful co-workers who are dedicated to service as much as I am," Augustine said. "They practice diversity unconsciously, not because it is demanded as an execution of their duties, but because it is an intrinsic part of their natures."

One of the most important things in Augustine's life besides joy for her job is her family, and she feels the Chancellor's Award belongs to them as much as it does to her.

"I am overwhelmed to have received the Chancellor's Award, but not for myself, but for my parents, my family, and my beloved daughters, as they are recipients of this award as well."