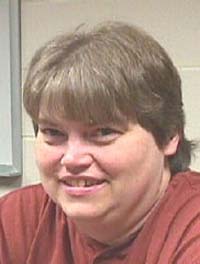 UW-River Falls World Wide Web guru Marlys Nelson has been named the recipient of the Chancellor's Award for Excellence. The award is presented annually to a member of the academic support staff for exemplary service.

In announcing the award, Chancellor Gary A. Thibodeau said Nelson "joins a select group of professionals on this campus who have received the award."

Her outstanding work and talents were admired by her fellow staff members who nominated her for the award. One faculty member noted, "I was struck by her competence and professionalism, and my respect for her has only grown over the years." Another nominator said, "Her ability to troubleshoot complex problems is impressive, to say the least."

One nominator's comment sums up the basis of the Chancellor's Award and the reason Nelson has received it: "She is the most knowledgeable and professional computer person we have. She gives 200 percent!"

As network specialist, Nelson contributed her talents to develop many components of the university's cyberspace presence. She helped develop and implement campus web pages and policies; she supervised implementation of major web site features such as the undergraduate course catalog and calendar of events; she installed and supported databases, scripting languages, develpment tools and discussion boards used by web page authors and course instructors; and she supervised student programmers in their development of web pages and applications.

Nelson shared in national recognition through a Silver Medal presented by the Council for the Advancement and Support of Education for her computer support to the bi-state St. Croix Valley Regional Tourism Alliance.

Nelson also assisted in the areas of network management and Unix Systems Administration. In network management, she was a key contributor in the design of the campus network topology; she installed, configured, and managed network routers, switches and hubs; she came up with a system that monitored, detected, and reported problems; she designed, implemented and maintained network security; and she supervised student technicians that assisted in network management. In Unix Systems Management, she installed and managed many servers that provided services to the campus; she wrote scripts, programs, and web pages to implement automatic account activation and maintenance for students and staff; and she developed procedures, programs, and scripts necessary to manage multiple servers.

Nelson has been with the university since her graduation from UWRF in 1978 with a bachelor's degree in mathematics with a computer science emphasis.