The recipient of the 2018 Chancellor’s Award for Excellence is Mark Klapatch, sustainability and custodial supervisor.

The letters of support submitted on behalf of Mark’s nomination were aligned in describing why he was worthy of this recognition, repeatedly referencing qualities such as commitment, excellence and selflessness.

As a supervisor in custodial services, Mark has been called a “creative leader” in implementing the more student-based custodial model that is now in place. Across his division, Mark excels as a communicator and is known as a problem solver and forward thinker with a positive attitude.

Nominators pointed to Mark’s love of learning and serving with examples of his work as a mentor and adviser to students, both during and outside of his regular work day, as well as his collaborative service on numerous committees. In the words of one nominator, “Mark genuinely seeks to motivate, inspire and show gratitude for others without seeking anything in return.”

One of Mark’s greatest contributions is likely creation and management of the university’s Surplus Property Sale. What started as a creative effort to recycle university property has earned the university best practice honors from the Association for the Advancement of Sustainability in Higher Education (AASHE). Based on the STARS Rating System of the same organization, UWRF has gone from achieving a sustainability rating of silver to earning gold – certainly much to the credit of Mark.

Through his tireless efforts to promote sustainability, Mark has earned the respect of his colleagues and students alike. In the words of one letter writer, “Although the sustainability portion of his job allegedly occupies only half of his time, Mark has given 150% of his effort to making UWRF a sustainable campus.” 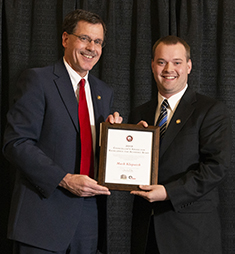