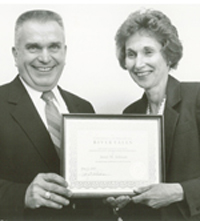 There was a recurring theme in the nominations of Janet Johnson for the UW-River Falls Chancellor's Award for Excellence: the very word "excellence" describes the way Johnson pursues her job as a specialist in employee benefits.

Johnson's competence, friendly manner and, as more than one nominator put it, "willingness to go the extra mile," won her accolades from UWRF employees and recognition by the chancellor, who named her the recipient of the highest award given the university's academic staff. Academic staff includes non-teaching professionals who work in such fields as student services, library and administration.

"Jan is simply outstanding in managing the benefits program for UWRF employees," said one nominator. "She always has prompt, accurate responses to questions."

"She is patient and understanding when people come to her with questions or problems," said another nominator.

Still another called Johnson "one of the really great unsung heroes on this campus. If anyone questions this, they should talk to people either entering retirement or the retirees!"

Chancellor Gary A. Thibodeau called Johnson a role model for the university's professional staff, adding, "Jan represents the best in terms of interpersonal skills we value so highly around here. She's a gem!"

Personally and professionally, Johnson sets high standards, according to the chancellor, who said he is impressed with Johnson's ability to remain current with constantly changing health care and benefit issues. He also praised her ability to explain the complexities of fringe benefits in understandable terms and to treat everyone she helps in the way she would like to be treated.

Award winners receive $250 from the UW-River Falls Foundation, an award and a place of honor during the fall convocation that formally opens the academic year.

Among Johnson's responsibilities are to work with all university personnel on matters involving insurance, retirement, leaves of absence, tax-deferred annuities and other fringe benefits.

She has served on the university's committee for affirmative action and holds a position on the UW System Fringe Benefit Advisory Committee.

Johnson said her pleasure in coming to work has been contact with university employees. "I like working with the people here. It would be boring to have a job that doesn't involve working with people," Johnson said.

Johnson enjoys playing bridge and she and her husband, Bob, a teacher at Meyer Middle School in River Falls, enjoy traveling.