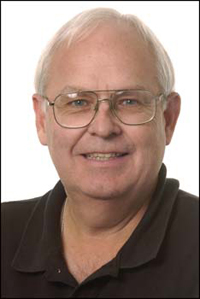 This year's recipient of the Chancellor's Award for Excellence at UW-River Falls is George Hansen, assistant director of admissions.

As assistant director Hansen travels to many different high schools to recruit students to attend UW-River Falls. He also serves as the transfer coordinator, advising students who are transferring from other universities and community colleges.

But the award is given to someone who goes above and beyond simply the roles of their job, based on nomination of the faculty and staff.

According to Chancellor Gary A. Thibodeau, Hansen "has served not only the Admissions Office but the entire University in the most exemplary manner. His knowledge, competence and commitment to this University are to be commended."

Hansen has been at River Falls since 1968 when he began as a college freshman. He earned his bachelor's degree in history and secondary education, then continued on to graduate school. He was hired in the admissions office upon graduation.

Hansen was a member of the choir all through school and continues to be active in the alumni choir. He also helps organize many other alumni gatherings and functions.

Since 1974 Hansen has handled public address responsibilities, announcing at various athletic events including basketball and hockey games. He has long been a scorekeeper at men's basketball games and contributes his musical talents at athletic events through singing the national anthem.

That deep connection to the University led one faculty member who nominated Hansen that he, "still has the undiminished zeal and enthusiasm that I first recognized in 1974."

Hansen helps out with public address announcing at special events associated with the Kansas City Chiefs training camp as well.

Hansen contributes his time and talents to the community as well, through leading congregational singing as a cantor at St. Bridget's Church and through many years of participation in the summer community theater and the Phipps Theater Community Choir.

Hansen said he was surprised when he learned he had been selected to receive the Chancellor's Award. "I had no idea I was even being considered," he said. "It is gratifying to hear the comments and compliments; it's nice to feel that what you do is appreciated. It really reaffirms your commitment to your job."

Another nominator noted of Hansen, "He has a great attitude, an excellent work ethic, a commitment to this University that is matched by few." But Hansen says that it comes naturally. He says he is only speaking and acting honestly about something he believes in because of the great experiences he had at UW- River Falls. "It is a good place to be for education, a nice community, it's close to the metropolitan area, it's all the things I tell students; there is real truth in my sales pitch."

One nominator's comment sums up the basis of the Chancellor's Award and the reason that Hansen has received it: "George invests himself fully in the life and character of UWRF."

Hansen will be recognized at the University's faculty and staff meeting that traditionally starts the school year in August. He also will received an honorarium from the UWRF Foundation.