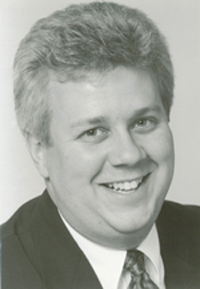 Words like "enthusiasm, leadership, relentless efforts, creative and visionary" were used when describing Mark Meydam, the winner of the 1994 Chancellor's Award for Excellence, the highest honor given to academic staff at UW-River Falls.

Meydam is an assistant director of admission at UWRF, where he has worked for more than 10 years. He earned his undergraduate degree in agricultural education from the university in 1985. He is currently working for a master's degree at Metro State University in St. Paul.

Meydam's contributions to his job and the university have come in many forms: summer registration, budget manager, computer systems, professional organizations, adviser and academic staff governance.

A Fremont native, Meydam was a leader of the university' new student summer registration program, which is now a model of excellence. He led the admissions office into the computer age by learning networks and helped implement an automated system. He also serves as an in-house trainer for admissions office student workers and volunteers.

"All these activities point to a man who is genuinely concerned about students and their welfare," a nominator said.

He developed a college planning workshop for students and parents which covers aspects of a college search, selection and application process. "Mark has delivered this workshop in our community for several years now. It involves giving up an evening of his personal time to provide a service to our students, which we greatly appreciate," said a nominator from off campus.

Beyond the office he has served on several university committees, including minority affairs, public relations, online telephone registration and several search and screen committees to recruit faculty and staff.

He interacts with students and would-be students every day through his job and did in 1988-92 as the Alpha Zeta adviser. Meydam also has volunteered as a statistician at Falcons football games and as a clock operator at men's basketball games.

Selection criteria for the Chancellor's Award for Excellence are success in fulfilling the overall responsibilities of the job, participating in University projects outside one's job responsibilities, and success in human relations.