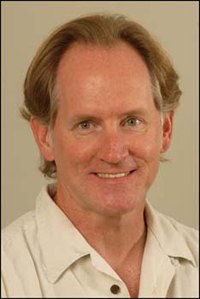 Art Director Tony Bredahl is the recipient of the 2000-2001 Chancellor's Award of Excellence at UW-River Falls. He will be officially honored by Chancellor Ann Lydecker at an awards reception on April 23.

The Chancellor0's Award for Excellence is presented annually to a non-instructional academic staff member who has made an outstanding contribution to the University.

Said Bredahl, a resident of Hudson, "My colleagues and student interns in the publications department deserve much of the credit for the work our group has produced. If the theory holds true that we are a product of our environment, I owe thanks for this award to the individuals I work with on a day-to-day basis."

"When I consider the people who received this award before me, I am overwhelmed at having been selected," he added.

Bredahl loves his work, and is doing what he has always wanted to do, which may explain why he has had so much success. Since earning a B.S. in art education at UW-RF in 1986, he has worked as a graphic designer at the University, and has been the recipient of five awards in visual communication for the UW System.

One of his most noteworthy accomplishments is the new visual identity he designed for the University, The project, initiated by Lydecker shortly after she took over as Chancellor in the fall of 2000, includes a University seal and logo, and re-design of the athletic logo. The new visual identity became official last April, and campus publications are in the process of being updated.

Bredahl's design group, a component of the publications office, provides a free service to campus, producing 400 to 500 projects each year with a turn-around time that averages two weeks. Bredahl's group can design anything from elaborate four-color pieces to simple, one-color projects such as tickets and flyers.