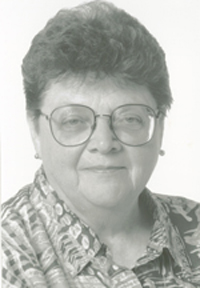 Long-time publications director and River Falls community leader Liz Oostendorp has been named the recipient of the Chancellor's Award for Excellence at UW-River Falls.

Oostendorp was cited for her extensive contributions as UWRF Publications Director, as the faculty representative to women's athletics, and for her community service that included leadership in the Chamber of Commerce, ambulance service, and River Falls Hospital Foundation.

In announcing the selection, Chancellor Gary A. Thibodeau said Oostendorp's contributions led to his recognition of her as "an example of our professional staff. She's a good standard bearer."

"Liz is the classic example of a total effort by a professional involved in the life of the University and the community. In an era of rapid changes in technology, she does an exceptional job of keeping pace that is well-recognized by her peers."

Oostendorp joined UWRF in 1969 after teaching at the University of Rhode Island and then in the Ellsworth School District. At the University, she joined the faculty to teach speech, splitting her time with the Publications Office. Within the next year, she became the full-time director of publications.

As director, she is responsible for developing visual identity standards for the campus, setting printing guidelines, purchasing outside printing service, managing the campus Fast Copy Center, and overseeing copiers across campus.

Faculty and staff who nominated Oostendorp for the award cited her numerous contributions over the years. These include:

"I feel really fortunate that our administration, including Gary Thibodeau and (former Chancellor) George Field see university involvement on state committees as being helpful to UW-River Falls," Oostendorp said. She noted that oftentimes technical information is difficult to obtain without participating in statewide associations.

As an example, she noted that Wisconsin law will soon require all state agencies to ensure that 45 percent of all its paper is from recycled stock. While UWRF has nearly reached that goal, the Council members recently learned that Wisconsin's paper mills are reducing the portion of recycled materials in paper production. That likely will require the Council to seek a change in state law, Oostendorp said.

"The state has done very well in working toward a national position on recycling," Oostendorp said. "The state's done a wonderful job, but it can't control the paper mills."

Oostendorp said she was pleased and surprised to receive the award.

"I was really amazed when Chancellor Thibodeau told me. I think a lot of the work we (professional staff) all do is very necessary, but not very visible. I certainly believe in its importance.

"I have enjoyed trying to make things better, whether in the community, on campus or in the state. I like to see things go as smoothly as possible. I like this campus: I think we have one of the best campuses in the nation for a University this size.

"There are an awful lot of people that have worked hard for that," she concluded.