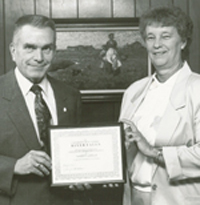 The Chancellor's Award for Excellence has been awarded to Judie Caflisch, coordinator of Extension Credit Outreach programs for UW-River Falls.

The award is given annually to members of the UW-River Falls academic staff who are nominated by their peers and evaluated on their success in fulfilling job responsibilities, participating in university service projects outside their job description, and human relations skills.

The award is presented by Chancellor Gary A. Thibodeau and includes a $500 bestowal.

In announcing the selection, Thibodeau praised Caflisch "for her professionalism and her sense of responsibility and commitment to the university. I am delighted to honor her with this very special award."

Caflisch said she was pleased to receive the honor and added that her roots are deep at UW-River Falls. She came to River Falls in 1961 with her husband, Tom, expecting to work while he finished his bachelor's degree. "After three months it looked like he was enjoying college so much, I enrolled," she jokingly recalled.

Her relationship with the university continued when she became a limited-term employee in the office of the Dean of the College of Education. Fulfilling clerical duties at work, Caflisch also began taking credit courses toward a graduate degree.

"When I was in my fifth year, with nine or ten graduate credits, it was time to make a decision. I could either lose them or finish," she said. Often feeling "too old" to finish, Caflisch said she was persuaded by Jim Stewart, who now heads the Rural Development Institute in which her program is housed, to finish.

She became a full-time academic staff employee in 1988 and received her master's degree in supervision and instructional leadership in 1990.

The program she manages literally "extends" the offerings of UW-River Falls to students as far as 75 miles away. It reaches areas of Wisconsin where there is a need for teachers, in particular, to expand their educational experiences but who have little time or resources to come to a campus.

"Our mission is to meet the needs of students who cannot travel to the campus because of distance, family responsibility or employment. I believe in that mission because I have had a family and employment and I understand that people can't drive an hour or two to do the things they would like to do," Caflisch explained.

Faculty members travel to the classes, which often have 10 to 15 students who fit the description "non-traditional." They are usually over 25 and have jobs.

Caflisch has high praise for the UWRF faculty and the community education coordinators in the cities surrounding River Falls where extension classes are offered. Those coordinators, she said, "are the greatest help to me in my job. They tell me what their teachers need and what their district needs and that is how we decide what to offer in various school districts."

High praise for Caflisch was abundant in the nomination forms prepared by her colleagues.

"I have received numerous compliments from area school administrators and teachers regarding how good Judie is to work with," one wrote. "They cite her friendliness, her attention to details and follow-up as key characteristics that make her so effective. This, combined with Judie's contagious enthusiasm for UWRF, has resulted in an enhanced image for the campus in area schools."

Caflisch is in her first term on the River Falls School Board, an elected position she said she sought as a way to contribute her knowledge of education to her community.