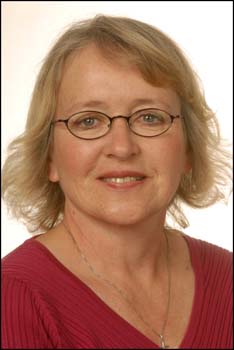 In a nomination letter, David Trechter of the Survey Research Center, wrote, "Gayle is simply integral to the functioning of both departments with which she works. ... Without a doubt, Gayle Dodge is the best [program associate] with whom I have had the pleasure of working."

She is actively involved with the American Cancer Society's Relay for Life and the Hearing Loss Association of Western Wisconsin and was a past coordinator of her church's food booth at the Pierce County Fair. 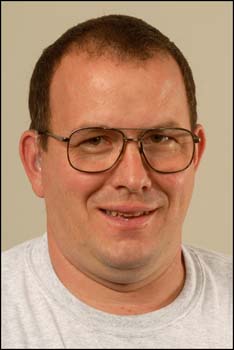 Joe Langer is a custodian in the Chalmer Davee Library, a post he had held for 21 of his 22 years as a campus employee.

Joe graduated from the Delavan School for the Deaf in 1983. Joe's library co-workers such as Brad Gee offered this praise in nominating him for the award.

"Joe's work ethic is contagious," said Brad Gee in nominating Joe for the award. "There is no justification for being slothful in the presence of a man who is hefting chair onto tables as if they were matchsticks - and this after having completed the morning chores on the farm."

Library Director Valerie Malzacher added "Joe is one of the most hard-working, dedicated, friendly and helpful individuals that I have ever had the pleasure to work with. I came to realize just how dedicated Joe is when were challenged with two years of library remodeling."