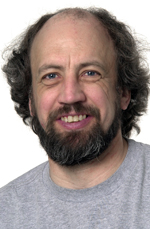 Joel Palmquist has worked as a facilities repair worker in the Facilities Management since 1995. The work he does involves mostly painting and carpentry for projects such as office remodeling.

Those who nominated him for the award cited his superior work, his reliability, his skill in working with students and his generous contributions of time and talent to the campus chapter of Habitat for Humanity.

"I can trust Joel to do anything that is assigned to him," said Greg Kohler, crafts worker and maintenance supervisor and Joel's supervisor. "During the summer, Joel runs our paint crews, supervising up to 20 students who paint our residence halls and academic buildings. They all love working for Joel, and they get a lot accomplished. I am very, very pleased to see Joel get this award."

Joel first volunteered to work with Habitat for Humanity 19 years ago in Georgia. He volunteered just for the experience and has been working with the organization ever since. He serves as a site supervisor for the campus chapter, making sure the necessary building materials are at the site and training the students.

The campus chapter of Habitat for Humanity is currently in the process of raising $30,000 to build a twin home, and Joel plans to help out by donating the monetary reward he will receive as part of the Chancellor's Award. He also plans to donate his hair. "If the students raise $1,000, I have pledged to shave off my beard," he said. "If they raise $2,000, I will shave off what little hair I have on my head! I'm hoping people will have an incentive to contribute, so they can see me without hair."

The students need $5,000 to $7,000 more before the end of May, he said, then they will have reached their goal. Donations can be made to the UWRF Foundation/Habitat for Humanity, with a note indicating that the contribution is for the Hair-Razing fund. 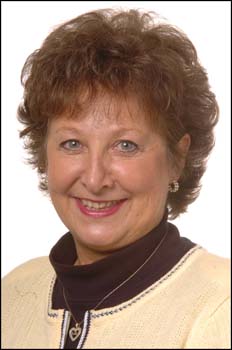 Reis has 26 years of service with the university. Since 1978, she has worked as a program assistant in the Math Department. She was hired in 1976 as a typist, a position she held for a month before becoming a stenographer in the Purchasing Department and later moving to the Math Department.

"Sherry receives uniform praise from the faculty and staff for her coordination and management of the department. Her dedication and hard work have certainly made my job as chair much easier," said her supervisor, department chair and Professor David Yurchak.

"In addition to all of her other responsibilities, Sherry coordinated the Science/Technology/Mathematics Fair held each spring for the ten years the fair ran," Yurchak said. "She also, for many years, coordinated the Career Choices Workshop. Her work for these events included handling announcements, advertisements, correspondence and budgets. She currently does this for the UW-RF Math Expo Traveling Exhibit."

Her nominators consistently mentioned Sherry's friendly manner, her willingness to put in hours outside of the regular workweek, her computer skills and her competency in all aspects of her job.