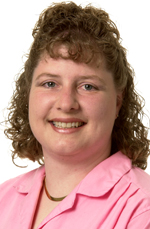 Kris joined the facilities staff in 1992 as a custodian. Like many of her colleagues, she has been responsible for many facilities. She's been assigned to work at Hagestad Student Center, Residence Life, Stratton Hall, the Agricultural Sciences Building, East Hathorn Hall and South Hall. Currently, she is assigned to Davee Library.

Nate Beeman, UWRF custodial services program supervisor, who nominated Kris, said she brings a lot of "extras" to the job.

"Kris, in particular, is always willing to go the extra mile," he said. "She never turns me down for anything out of the ordinary. She is the first to volunteer for assignments. She willingly comes in on Saturdays or she rearranges her personal schedule to help out. She's in it for what's best for the university.

"Every place she's worked, she's been well-liked. When she transfers to another building, people are unhappy to see her leave," Virgil Nylander said. "Jones embodies what UWRF is all about."

"It's not really about bricks and mortar that makes the campus special," Nylander said. "Kris knows precisely what it is. She told me: 'It's the people. I like to meet all of the new people in the offices. I've made some really good friends; including some who remain my friends even if they are no longer on campus.'"

Doris Wolf began working part-time as a typist in the Athletics Department in 1981. Since then she has been promoted four times, and, said Virgil Nylander, with each new assignment has excelled at her responsibilities.

Interim Athletics Director Rick Bowen, in nominating Wolf for the award, noted that "Doris goes above and beyond to get the job done. She is invaluable to the smooth running of the athletic program. Her loyalty to the university, her work ethic, her outstanding interpersonal skills, and her years of dedicated service make her a truly valued employee."