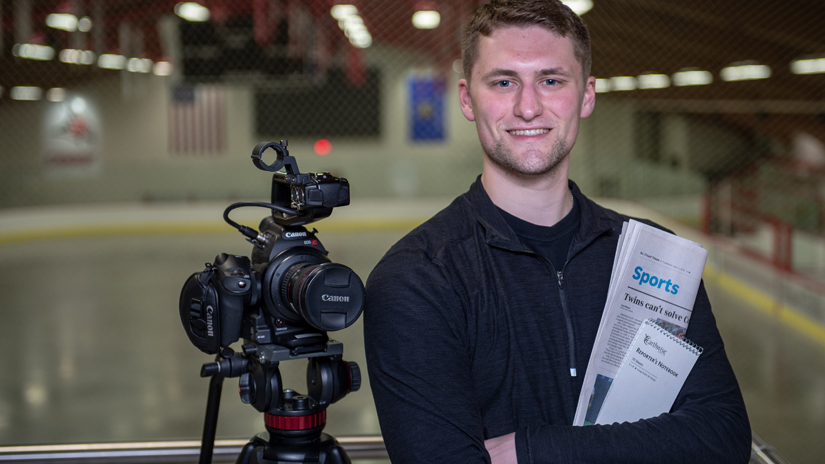 Zach Dwyer always had a nose for news, especially news about sports. He’d read the sports section of the newspaper every day to study how reporters wrote their stories. Zach knew it was something he wanted to pursue when he went to college.

He wanted to attend a public university close to the Twin Cities, so he took a closer look at UW-River Falls.

“UW-River Falls is small enough that I knew I could get involved reporting and working at the radio station right away,” he says. “I had also seen other people like Boyd Huppert and Cathy Wurzer had gone there. Touring here, it felt like this was the place that could give me the best opportunity to succeed right away.”

When Zach graduates from UW-River Falls May 11, he’ll start his new role as a multi-media sports reporter for the St. Cloud Times.

“My course work and experiences at UWRF have given me the building blocks and the resources I need to take it upon myself to be better as a journalist,” he says.

Zach started writing for the campus newspaper, The Student Voice, his first week on campus. He also started doing play-by-play for football games for the campus radio station, WRFW. During his time on campus, Zach grew in his roles to eventually become editor-in-chief of the paper and host his own sports radio show. He spent his senior year as a sports information intern for the Athletic Department

“I figured sports is something I’m very comfortable covering so it was a good place to start,” he says. “My first two years on campus, I wrote at least one to two stories every week. I did play-by-play for as many basketball and football games as I could.”

In an effort to broaden his experience beyond sports, he spent the summer after his sophomore year as a news intern for the twice-weekly Red Wing Republican Eagle newspaper.

“I wrote about a lot about things I wasn’t familiar with before like county fairs and agriculture,” he says. “That helped to give me a broader understanding of things and to step outside the box of what I’m comfortable with. I was able to learn the ropes and see how a professional newsroom works. That was a great experience.”

Zach’s coursework at UWRF included print, audio and video storytelling to give him the tools to join news teams in the age of the 24-hour news cycle as well as social media.

“In my job with the St. Cloud Times, I’ll be doing a lot of multi-media work when I’m not in a sports season,” he says.  “I’ll also be doing a lot of photography and video work for other reporters as well and helping out with a studio sports show. Having that experience is going to be invaluable for what I do in the job market.”

Zach’s plan to get involved right from the start has paid off and he encourages future Falcons to do the same.

“Try things that you might not think you’re ready for,” he says. “Being able to start things on campus right away made me so much more comfortable and gave me confidence. Being here made it so much more of an opportunity to grow.”