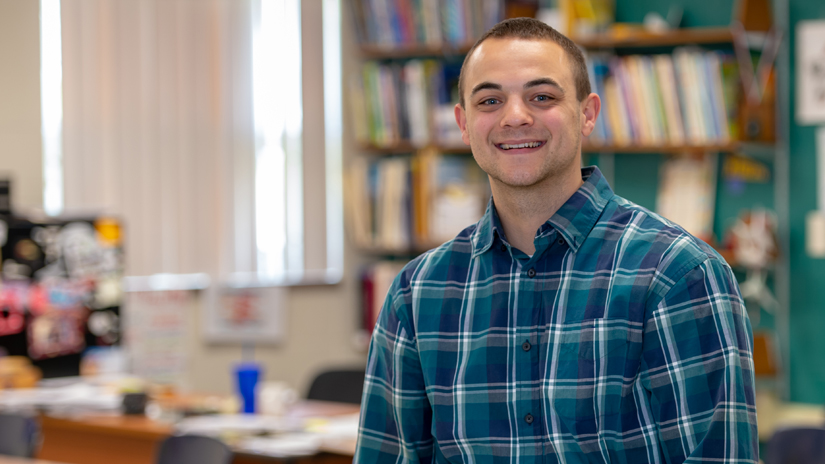 When Zac Weber finished high school, he wasn’t sure he was ready for college.

“I didn’t know what I wanted to do right away, so I was hesitant to even go,” he says. “My mom and dad encouraged me to give it a try, so I did.”

Four years later, Zac is graduating with a degree from UW-River Falls in mathematics education and starting his teaching career with the Le Sueur (Minn.) School District.

When Zac started his college search, finding a place where he could make connections with his professors was important to him.

“I visited UW-River Falls and I loved everything about it,” he says. “I wanted to have that kind of relationship with my professors as I had with my high school teachers. My professors knew me by name. That’s one of the main reasons I chose River Falls.”

When he arrived on campus, Zac thought he might pursue something related to math, but teaching wasn’t necessarily top of mind at first.

“My adviser Professor Erick Hofacker thought it would be good for me to try an education class to see if I liked it,” he says. “I liked the class and thought I could see myself teaching. Four years later, here I am graduating with an education degree.”

Zac was able to have some flexibility with his course load because he came into UW-River Falls with 24 credits he’d earned in high school through Southwest Minnesota State University.

“Having those credits was a huge savings,” he says. “It also gave me the ability to lighten my course load and not stress myself out so much.”

One of the key pieces that prepared Zac for the classroom was the Mathematical Progressions Through Habits of Mind program that was part of a Mathematics and Science Partnership grant managed by Professor Hofacker. The program, which involved 18 partner districts, multiple universities and nearly 150 participants, provided over 100 hours of pre-professional development time.

“I spent two and a half years working with other teachers from Western Wisconsin,” he says. “I spent 10 hours a week in the New Richmond School District, in a sixth-grade classroom and then an eighth-grade classroom. It helped me gain experience as a teacher and strengthened my professional development.”

When Zac starts his job in the Le Sueur School District in the fall, it will be very familiar since he completed his student teaching there.

“I had multiple job offers but chose Le Sueur because I know the staff there,” he says. “They are such a welcoming staff and a good community there. It’s similar to my hometown in the sense that the school and community relationship is really good.”

Zac is also glad he already has a team of mentors ready to help him.

“I know teachers that have worked in Le Sueur and have gone other places and they’ve said that you’re not going to have the mentorship that you will in Le Sueur,” he says.

Zac’s advice for future Falcons comes from his own experience.

“Come into college with an open mind,” he says. “Don’t have your mind necessarily set on one specific thing because at 18 years old, it’s very hard to know what you want to do for the rest of your life. Maybe you might start out with one thing, but you could change your mind and go onto a different path and do another thing and that’s just fine.”