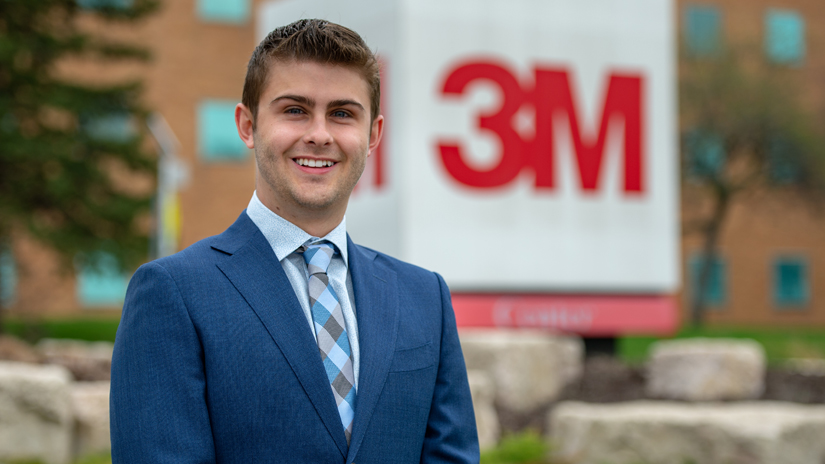 It all started with an i-Pod touch.

Vincent Hellenbrand’s parents told him if he earned the money, he could buy one. Vincent, a middle-schooler at the time, was determined to do just that. He went door-to-door in his neighborhood to see if anyone had yard work or chores he could do. It took a couple of months, but he made enough money to buy the i-Pod touch and an entrepreneurial spirit was born.

Vincent continued to do yard work and landscaping projects throughout high school, building a small business and hiring friends to help with the work. The landscaping projects also became more involved, including a backyard waterfall for a neighbor. He also worked full-time during the week in the summers for a larger landscaping company and would work weekends on his company’s projects.

“I liked being busy and I grew up working in my parent’s yard,” he explains. “They were always very proud of how it looked. It was a hobby that turned into income.”

It would have been easy for him to have continued in his budding business and forego college.

“I find the value in education,” he says. “My mom is a professor and my sister teaches elementary school. Education is big in our family and I just knew it wouldn’t hurt and it would be another asset in my toolbox to be successful on the business side of things.”

Since his mom teaches at UW-Madison, he was looking for something different.

“I wanted to go some place affordable, at least for the first couple years,” he said. “I was looking at business schools a little further away from home. I toured UW-River Falls and I fell in love with the campus. Being outdoorsy, I can appreciate the campus. It’s the right distance from home.”

The Middleton native thought that he might return to UW-Madison after two years. Those thoughts went away after spending time on campus at UW-River Falls.

Vincent will graduate May 11 with a degree in business administration-management and a philosophy minor.

“People looked at me funny when I said I had a philosophy minor,” he says. They’d ask ‘Why not econ?’ he said.

“My philosophy classes encouraged me to think about what it means to be a good person, what it means to have ethics,” he says. “Besides making money and making the deal and selling things, there are other things that are important as well.”

His next stop is not his landscaping business back home, but 3M. He begins his job as a designated sales representative in industrial sales on June 17.

Vincent’s road to 3M began with a class field trip to the company through Professor Marina Onken’s Business Management class.

“I was very interested in working for 3M,” he says. “I got the business card of the hiring manager who had given us the tour. When I got back to campus, I emailed her to see if she’d be willing to meet with me to talk about careers at 3M.”

The hiring manager agreed to have an informational interview. Even though Vincent didn’t have a traditional sales degree, the hiring manager was impressed with the work that he’d done marketing in his own business and with his drive.

“She encouraged me to apply and I was hired after just the informational interview,” he says.