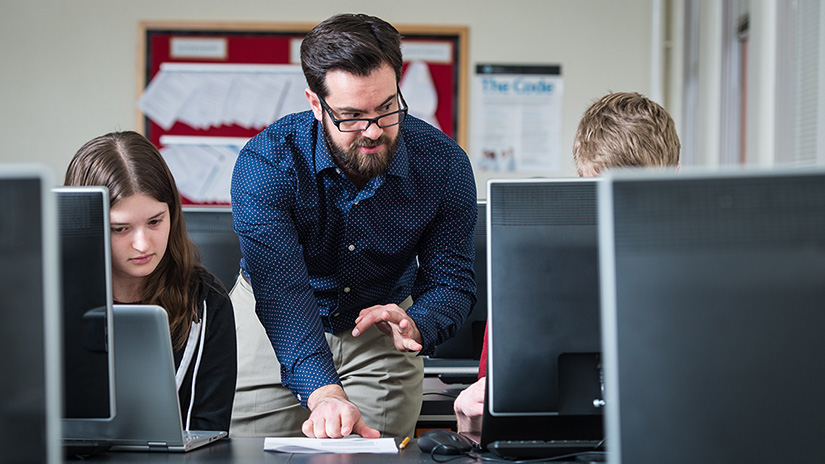 Steven Livingstone’s path has taken him around the world. A native of Brisbane, Australia, he earned his degrees in his home country before landing in Canada to pursue research fellowships. Eventually, he decided to search for a permanent position, and that decision led him to the University of Wisconsin-River Falls.

“When I came down to visit, I looked at the program, I looked at the faculty, and I knew that it was going to be a great fit for me. Dr. Hossein Najafi [department chair, Computer Science and Information Systems] seemed to be running a really dynamic program here,” he recalls. “When I came down to meet everyone, they were extraordinarily friendly, very welcoming and I loved the position. River Falls just felt right. Everything aligned.”

While the people were great, it wasn’t just the personalities that attracted Steven, now entering his second year as an assistant professor at UW-River Falls, but the opportunity to pursue two of his passions: teaching and research.

“I actually come from a whole generational line of teachers. I think it’s just something I’ve always enjoyed, teaching students, or anybody really. I enjoy when they acquire knowledge and the excitement that they get when they understand something and they learn something new that they can apply in their lives,” he says. “When they feel proud and happy that they’ve made something of themselves- that’s something to get excited about.”

“This was my first time teaching full undergraduate courses. Stepping back into the mindset of what it was like to enter a university campus on the first day was something that I really had to think about when I entered the classroom,” he says. “You go back 19 years or whatever it was when you first stepped onto a campus and you think, ‘how do I reassure these kids that it’s going to be just fine, that the university is going to be a good experience?’”

“I had to recognize that while I have been surrounded by my Ph.D. professors and fellow Ph.D. students in their late 20s lately, these students are straight out of high school. This is a formative experience for them. Just stepping back into those shoes of what it’s like to be an 18-year old and teaching around that, that was probably my biggest learning experience.”

And in his first year, Steven was just as impressed with the students as he was with the university during his initial visit.

“The students have been fantastic. They are really motivated by their real-world experiences and they are very serious about their studies,” he explains. “It’s very clear through my accent that I’m not U.S.-born, and they’ve been lovely, very friendly, very welcoming.”

As for his second passion? Steven makes it clear that he is as equally enthusiastic about his research as he is his teaching.

“The area I work in is referred to as affective computing. It really lies at the intersection of computer science and experimental psychology. I’m very interested in human emotion, how we express it, why we express it and I’m using computers and algorithms to recognize, predict, understand or even express human emotions.

It’s cutting edge work and Steven is thrilled to be bringing it to River Falls.

“I’ve started working with a student in the CSIS department. He was very lucky in that he was awarded a research grant for us to work on a project together. That project is continuing on some work I did before I moved to River Falls,” he says. “We’re trying to develop a computer application that will assist in the rehabilitation of facial expression function in patients with Parkinson’s disease.”

“I was very encouraged that River Falls wanted to support my work. In particular, I want to underscore the asset of my dean, Michael Fronmueller. He has been very good in supporting me and helping get my lab set up.”

That lab, says Steven, will allow UW-River Falls students to collaborate on impactful and innovative research.

“The lab itself is called the Affective Data Science Lab. The reason we created the lab was to create a space in the university and in the department where we can explore affective computing. My students can come and do research, hang out and do what they love doing- coding and running experiments,” he says.

“The idea of the lab is that a lot of the work will be bringing in human participants. They’ll come in, sit down, we’ll hook them up to all the equipment and capture their physiological signals, heart rate, skin temp, all these sorts of things,” he explains. “We’re basically trying to figure out what’s going on when and where, and then do things - whether it’s playing video games, playing music, exposing them to emotional events – and then try to figure out if we can develop applications that can recognize what’s going on and then respond to that.”

Steven’s likens his innovative research with the groundbreaking moves being made at UW-River Falls. Data Science and Predictive Analysis was introduced at the university in the spring of 2016, making UW-River Falls the only school in the UW System, and one of only a handful nationwide, to offer the undergraduate degree at the time.

“We understand the university can’t just be a place of theory, it has to be a place of practice. We’re very responsive to what the industry is asking,” says Steven. “The industry said, ‘we need data scientists,’ so River Falls responded and said, ‘okay we’re going to be one of the first undergraduate institutes in the system and even in the country to offer these programs.’”

While he brings a wealth of global experience and innovative thinking to the classroom, Steven acknowledges that, despite the field of study and the area of the world, being a student – and a teacher – boils down to the same core tenants.

“I think the one kind of unifying aspect is that no matter where you’re from, students everywhere have the same sort of needs and questions and issues of self-doubt,” he says. “Everybody is a little bit vulnerable when they’re first starting out, a little bit scared, and you just need to reassure students that everything is going to be okay.”

“It’s the same basic building blocks of being a teacher no matter where you are.”