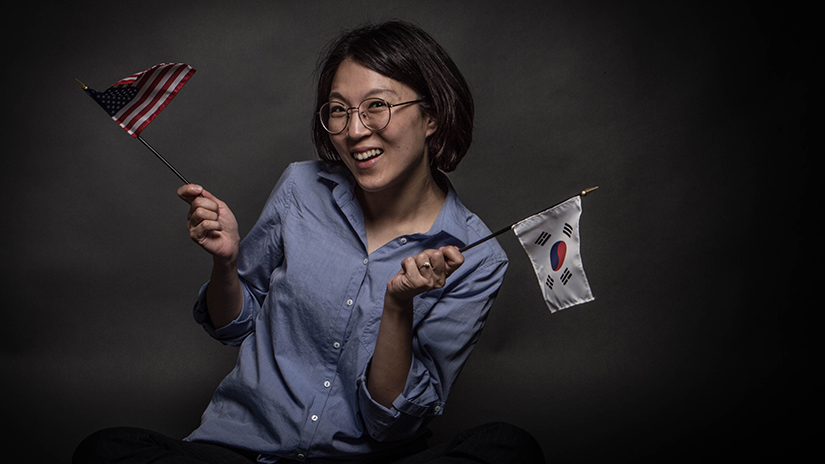 Exuberant might be the perfect word to describe Sooh-Rhee Ryu. An assistant professor of political science at the University of Wisconsin-River Falls, Sooh-Rhee’s enthusiasm for not just her work, but her students - and life in general - is contagious.

Born in Germany and raised in South Korea, Sooh-Rhee’s path to River Falls was both global and varied. The daughter of a political science professor, she received her bachelor’s degree in political science and diplomacy from Chungbuk National University in Cheongju, South Korea, before earning her masters at Seoul National University. From there, she traveled to the United States, enrolling at SUNY Buffalo, where she earned her Ph.D. in political science. The path to her doctoral degree wasn’t always smooth though.

“I made it there [Seoul National University] through a special recruitment process. Once I got in [to the master’s program], I realized these people were so different. I was the only one coming from a local, small university. I wish I could call myself a trailblazer, but the master’s program was very hard. I was the youngest and kind of an outsider. I survived though!” she recounts with a smile and a laugh.

Her time at Buffalo brought its own set of challenges.

“When I was accepted to SUNY Buffalo, it was without funding. I was approaching the end of my second semester and I realized it wasn’t working out financially,” she says. “I bought a one-way plane ticket back to Korea and decided to start over. I thought maybe I would go to Germany or something. I was really sad because it was an unfinished mission. But that was the reality. The financial part was such a big deal. I went back to Korea, but then I got an email from the director of graduate studies. There was hope.”

Buffalo gave Sooh-Rhee a teacher assistantship and according to her, the role changed everything.

“That was the turning point of my life, I would say. I was able to really focus on my studies when that financial burden was relieved,” she says. “I worked hard to complete my research and graduated with my Ph.D. in 2008.”

Eventually Sooh-Rhee and her family found their way to Wisconsin in 2012 when she joined the faculty at UW-River Falls. One of the biggest draws to River Falls, she discovered, was how much campus felt like home.

“When I was interviewing for this job, I immediately felt like this was the same atmosphere of the college I went to, Chungbuk National. There is a local feel, it’s at the state level. Even the color of the buildings and the campus. It was kind of like déjà vu and I felt like home,” she recalls. “I just kind of felt it. Like this is it, it’s going to work out.”

“From the moment I walked onto campus from the hotel, and it was kind of rainy and I had this umbrella that Davida [Alperin, professor of political science] had let me use, and I was walking and I was just like, ‘yeah, this is it, I have a good feeling,’” she says. “That feeling of being home was one thing and because I had that same state-level college experience in Korea, I could see what these students may want to become when they graduate. I know the struggles they may have. Maybe they want to go out and explore what’s out there. It was the same feeling when I was at university.”

“Because I teach international studies, I get several international students each year. I totally see their struggles with the language thing. You have to translate in your head and you can be very shy and timid about saying something in class and then when you’re finally ready to say something, the discussion has moved on to the next topic,” she says. “I can see these quiet international students in my classes and I think ‘you are all very smart! The fact that you’re here, studying in the U.S. in a second language is amazing!’”

The ability to relate doesn’t necessarily correlate to easier guidance, though.

“My standards are high too. It’s tough love sort of. You are responsible, you are in college. Hopefully that turns out to be something that makes them work harder and they do have to work very hard,” she explains. “I connect very well with international students because I understand what they’re going through. I pride myself as a mentor for those international students. I’ve been through it.”

“My first day of class as a graduate student teacher, I thought they weren’t going to take me seriously. But I’ve learned that I’m not just the ‘information guy’ but my job is a bigger role. I have to pass on knowledge to them,” she explains. “In that regard, I was able to relax more. Students know that I’m honest with them. They get honest responses from me. I’ve evolved to a more relaxed teacher. I see questions coming. I’ve learned to be more of myself."

The difference between information and knowledge is a critical piece of Sooh-Rhee’s teaching.

“Google can give you the details about a person’s name or a specific date. I’m trying to teach them the implications of a situation or a theory. What are the implications for the future? How do we interpret what was happened now versus what has happened in the past? That kind of thing,” she says.

“Students learn in middle school how to tell the difference between fruits and vegetables, right? That’s information,” she explains. “How to make a salad and eat healthy, now that’s the knowledge part. I’m teaching them how to make a salad. It’s the critical thinking. It’s the ability to analyze things and the big picture thinking.”

Sooh-Rhee’s international background hasn’t just written her story, nor does it only allow her to connect with current international students. Her upbringing and experiences allow her to bring a level of authenticity to the classroom and her work as a teacher.

“I tell my students, you’re going to get sick and tired of my South Korean examples. Lots of examples!” she says with a laugh. “Especially when it comes to politics of a developing world, even with international relations. There are things I’m just so much more familiar because I’m Korean.”

“I’m hoping if I bring up those examples - because they’re very detailed – I think it will give students a better understanding of the subject,” she explains. “Within international relations, there is tons of South Korean stuff I keep mentioning. Within the class material, within context, I bring up a lot of examples. I hope it allows me to give them a better education.”