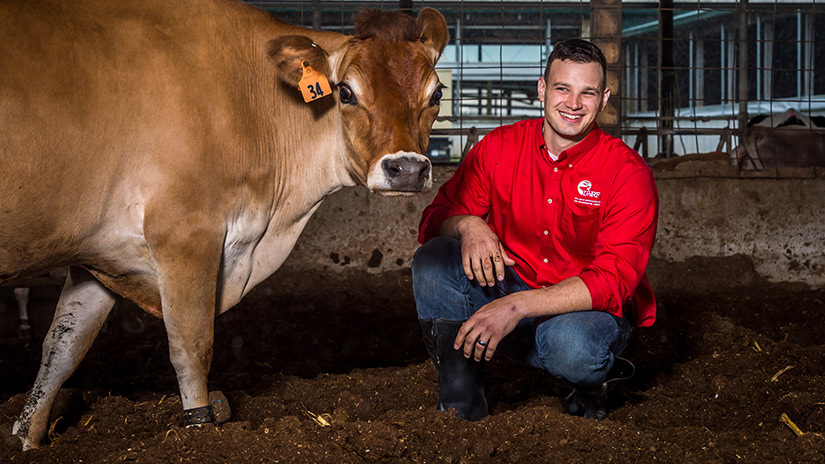 For Kurt Vogel, mentorship isn’t just something that comes with his job, it’s in his roots.

“My dad is a really good mentor for young people. I was kind of raised around that,” he says.

Vogel, an associate professor in the Animal and Food Science department at the University of Wisconsin-River Falls, always knew that mentoring was part of his calling, although it took a little longer to settle on a field.

“I grew up here in Wisconsin on a dairy farm in the southwestern part of the state. I went to college at UW-Madison. I bounced through a couple of majors there because I had a hard time figuring out where my passion was,” he explains. “I ended up landing in animal science and always had this feeling that I wanted to teach. That was something I always really enjoyed.”

As it turned out, Kurt says, teaching in the animal science field ended up being the perfect fit. When asked about his path to becoming a professor, he gives credit to his love of mentoring.

“It was the mentoring part. That was something that was really important for me. I kind of came at this from a different angle than most people in my field do, in that usually research is the big draw in animal science,” he explains. “I really always wanted to teach and that was something I always felt was a strength for me so that’s what drew me in to wanting to be a professor more than anything else.”

“I also thought that I had a fair amount of practical background and experience and I had developed this ability to tap into that while I was teaching, to find examples that would resonate with the students,” he says. “I felt that I had a skill set that was appropriate for this type of work. But it was really the mentorship piece that kept drawing me back to this career.”

After earning his bachelor’s and master’s degrees at UW-Madison, Kurt was connected with one of the most highly regarded animal welfare experts in the world, Temple Grandin. He worked with Grandin for a few years while he was living in Wisconsin before receiving a once in a lifetime opportunity.

“She [Grandin] invited me to do a Ph.D. with her. So we [Kurt and his wife] took the opportunity because it was a once in a lifetime thing. We packed up and moved to Colorado,” he says.

During his time at Colorado State, Grandin’s influence had a profound impact on Kurt.

“She really has shaped the way I go about things. It was a really special experience for my wife and I to be able to work closely with Temple. There were a lot of things we got to see and experience with her that people who aren’t close to her don’t,” he explains. “One thing that people don’t see so much with her is that even though she is on the autism spectrum, she still has this ability to develop close bonds with people. She still experiences emotions in a way that we often think people with autism may not do. It was cool to see that. It really helped my understanding of autism and Asperger’s.”

Working closely with Grandin influenced Kurt not only in a personal way, but also in his professional path.

“She [Grandin] has a really high level of care for teaching. That’s another thing that people don’t necessarily know about her. To her, teaching is sacred. She has this rock star like schedule for travel, she’s flying everywhere all the time and every spring and fall she teaches this class that meets on Tuesdays. She will be there every single Tuesday,” he shares. “But right after, she might be right back to Denver International Airport to take off again. I appreciated that.”

“I think I got matched up with the right person at the right time. I had this personal value for teaching and for mentorship and she has the same thing,” he says.

Kurt didn’t just take away big picture-type revelations from his time with Grandin, but ideas and concepts that he brings directly to his classroom and his students.

“Another thing that had a big impact on me was something she called project loyalty. The way she described it is that if you’re working on a project, you have some task you have to do. At times, it’s going to get hard and those are the times where you just need to remember to just stay loyal to the project,” he explains. “Whether there’s personal conflict or difficulty in making things happen, you have to stay project loyal. That’s one of those things that I try to pass along to the students I’m mentoring as well because nothing ever goes perfect. That’s one of the things that really had an impact.”

Kurt isn’t the only Grandin connection to UW-River Falls, though.

“Temple actually has one of our former students starting with her this fall. Faith Baier just graduated and is going to work with her,” he shares. “I got to mentor Faith really closely almost the entire four years she was here. I think she’s going to be a real star.”

When asked what it’s like to see his students earn opportunities like Baier’s, Kurt relates his pride back to the value he sees in mentoring.

“The cool thing about it is being able to help the next person along. You kind of get to turn around and give them a hand up. The thing I really hope for with the students that I teach and mentor here is that I hope they go a step or two further than I did,” he says. “I get a lot of enjoyment out of that. I like to watch people take what I’ve helped them to see and then just launch afterwards.”