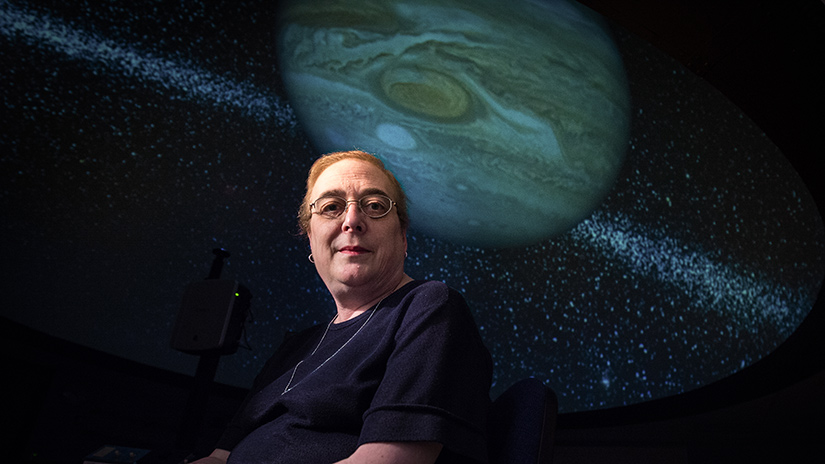 “The longer I’ve been teaching, the more I’ve been hearing students make connections that I hadn’t really thought about myself. Once I was asking students to do some calculations,” she recalls. “I said, ‘you don’t have to do the math but how would you if you had to do it? How would you go about calculating how many seconds in a minute, how many seconds in an hour, and so on.'”

“One of the questions that I asked was, ‘how many minutes are in a year?’ And I expected that they would pull out their calculators and start figuring it out,” she says. “There was a group of six students sitting up in the left corner of the classroom and they immediately said ‘525,600!’”

“I just said, ‘how did you get that so fast?’ Of course, their response was ‘Rent.’ I thought, ‘Oh my goodness, how many times have I heard that song and it never occurred to me that they were using the real number,’’ she says with a chuckle. “It turns out, all those students were theatre majors.”

“I started to think about how many other connections am I missing? What are the connections that students immediately see for themselves? Where can I bring a little math, a little agriculture, a little art into my classroom?” she says.

“That made me really conscious of wanting to have something for everyone. And so about nine years ago, I started a course called Science and Art. I wanted to show how science and art had the same ideas at the same time, and even then, as I started to think about bringing those two ideas together it was ‘oh, there’s a math connection! There’s a horticulture connection! The list went on.'”

For Eileen, combining fields started long before arriving at UW-River Falls. While she stayed within the sciences, her interests covered a wide range of subjects. A Milwaukee native, Eileen majored in chemistry, biology and secondary education at Mount Mary College before spending six and a half years as a high school chemistry teacher.

“I thought I had a license to teach absolutely everything but physics, so maybe I should go back and pick up one more license,” she says.

She earned a degree in physics from UW-Milwaukee before heading to grad school at the University of Rochester, where she added a Ph.D. in optics. She then spent several years working in the private industry before returning to teaching.

“It was a very different culture. I got to teach people how to use instruments. The reward was always, ‘you did a good job, let’s offer you a prize.’ It was often money,” she recalls. “I was young enough to think that there was something better than that. I was just missing teaching. Teaching is really what I love to do.”

Eileen has taken that love of teaching and combined it with a passion for both the sciences and the interdisciplinary nature of a liberal arts education.

Those connections, says Eileen, are something that UW-River Falls hasn’t just recognized, but embraced. The ability for students and faculty to experience various fields and develop diverse passions is something that she views as a positive.

“When I do meet with students, either as prospective students or when they come to registration, and they’re still not sure what they want to do, I usually start off by telling them I didn’t know what I wanted to be either,” she says. “I started college and I kind of thought I wanted science, but I didn’t know which one. I kind of wanted to do theatre. I just didn’t know.”

“We’re at a place here [UW-River Falls] where we can cross college lines. Physics is my point of perspective, but I think it must be true of other disciplines. You start here and you take, say a physics class because you think you might like science and then you realize that you really want to be an actress,” she continues. “You know what? You still need a science requirement and physics has taken care of that.”

“Nothing gets wasted here. So you can start at almost any point of interest here, anything you are interested in, and of course, it’s going to change and it may evolve. You should evolve because you are changing as you think,” explains Eileen. “But nothing has gotten lost. It all is part of your experience here. I have not encountered any wasted credits. You can start anywhere you want to and find yourself.”

A community theatre actress, Eileen expresses her appreciation for the fact that the “crossing of lines” isn’t something that just happens in the classroom at UW-River Falls.

“We’ve got biology majors playing in the band. Communications majors who are singing solos. It’s not just allowed, it’s encouraged.”

When asked why an interdisciplinary approach is important, Eileen is quick to share her answer.

“You don’t know if people always want to know all the mechanisms of everything, but they do want to understand their world somehow,” she says. “I think it makes life so much richer to have even a little bit more knowledge than what you started off with.”

As the conversation winds down, Eileen relays a story that illustrates her strong belief in not just making connections, but acquiring knowledge.

“There was a student that came up to me, I think he’d been graduated for six years. I saw him by chance and he said he had just been at an art museum in New York and that he had seen one of the paintings we had talked about in Science and Art,” she shares. “He said, ‘I’m telling my wife, ‘see the symbolism in this and notice that.’ And he said he looked around and there were 20 people standing around him and he thought ‘I’m the man! I’m the one who’s telling everybody what that is.’”

“He said he was the only one there who knew that. Other people were looking at it and they’re going, ‘that’s nice,’ but he knew something about it. He was not an art major, he was a science major.”

“That’s really a highlight for me to know that my students are carrying something with them that is making their lives richer even beyond my scope,” she says. “That’s really what my goal is. I want students to not necessarily remember me, but remember that they had a positive encounter with science that stays with them. It’s nice to have students who leave here thinking their life is so much richer now because of all the stuff that they got here.”