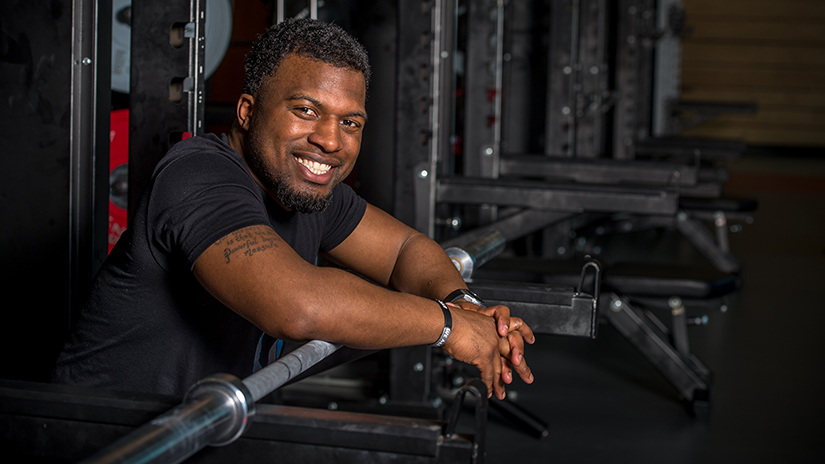 It took a few stops for Nicholas Rusch-Maier to figure out where he wanted to be.

“I transferred four times in five years. I started off at a two-year school in Duluth, Minn., but I didn’t really like the feel of it. Then I went to the University of Wisconsin-La Crosse and I liked it there, but I missed playing football,” he explains. “I went to another two-year school with the mindset of ‘do well in school, do well on the field and you’ll see results.’”

“I worked hard and that’s what happened. Coach [Jake] Wissing recruited me to come here and I have absolutely loved it. I have been happy since the day I got here and truthfully, this is probably where I should have started my journey off, but everyone takes a different path,” he says.

Though his path to the University of Wisconsin-River Falls was slightly long and winding, Nicholas settled into campus and thrived. Now, with graduation quickly approaching, he’s looking forward to the next stop on his path. Shortly after commencement, he will begin work as a performance coach with Synergy Sports Performance in his hometown of Green Bay. An exercise and sports science major at UW-River Falls, Nicholas’ role at Synergy will include both adult fitness classes and personal training with high-performance athletes.

The ability to work with athletes and stay connected to the world of sports and physical activity was something Nicholas always dreamed of. He started as a Synergy client as he was preparing to make the jump to becoming an athlete at a four-year university. Knowing the game was going to be faster and more intense, he first trained at Synergy before reconnecting with them last year and landing an internship. He spent the summer of 2017 interning at the company that he will now work for as a full-time employee.

“I’ve been an athlete, but I knew you couldn’t play forever. I was like, ‘how can I be around the sport forever?’” he says. “That was this kind of field.”

While a career in athletics was a natural fit for Nicholas, the desire to work with high-end athletes was a more specific niche, one that parallels some of his own experiences.

Challenges are something Nicholas has encountered plenty of at UW-River Falls and he’s grateful for them.

“Almost every day has posed some kind of challenge, whether it’s from Coach [Carmen] Pata in the weight room or one of my teachers. Coach Pata will challenge me and ask me what I’ve learned today, or he’ll ask me a question and I really have to stop and think about what things mean,” he explains. “He’ll push me to not just say an answer but to look for the meaning behind the question, which isn’t always the easiest thing.”

“My teachers here [at UWRF] have challenged me. Many of my classes have been about the clinical aspect of exercise science and it teaches me to think about things in a clinical way. It pushes me to see that perspective,” he continues. “There’s no way a client is going to ask me to hook them up to an ECG machine in the weight room, so I have to think about how I bring that into my field.”

“We’ve done heart rate and blood pressure work. I can use that and instead of saying, ‘okay, you’ve got a two-minute rest period,’ we can talk about what their heart rate is, how to get it down. Being able to use that – apply the clinical stuff I’ve learned and mold it to my profession is a challenge – but it’s a good challenge,” he says.

Nicholas’ mantra of “do well in school, do well on the field and you’ll see results” was his own way of marrying his challenges with his motivation. Along with learning how to manage challenges, the mindset of motivation is another theme Nicholas has encountered at UWRF.

“I really enjoyed my physical activity behavior class with Kristi Kropp-Wagner. We looked at different mindsets, how to get someone motivated, the different theories that go into motivating someone,” explains Nicholas. “I would always just show up to work out with Coach Pata and not realize what went into it or why they said that.”

“After that class, I now understand why they said that to me or ‘oh, that’s why my football coach said this.’ It makes sense that that motivation may not work with you, but it may with somebody near you,” he says. “Everyone works differently.”

Now that his chapter at UW-River Falls is nearing its end, Nicholas is motivated by what lies ahead of him, but thankful his path led him here.

“I’ve loved it here. It’s a place that feels like home but now I feel prepared for the next stage. I’ve had summer jobs where I have had to motivate other employees but now it’s an everyday thing. You have to do it day in and day out,” he says. “It’ll be different, it’ll be a learning curve and it’ll be a challenge.”