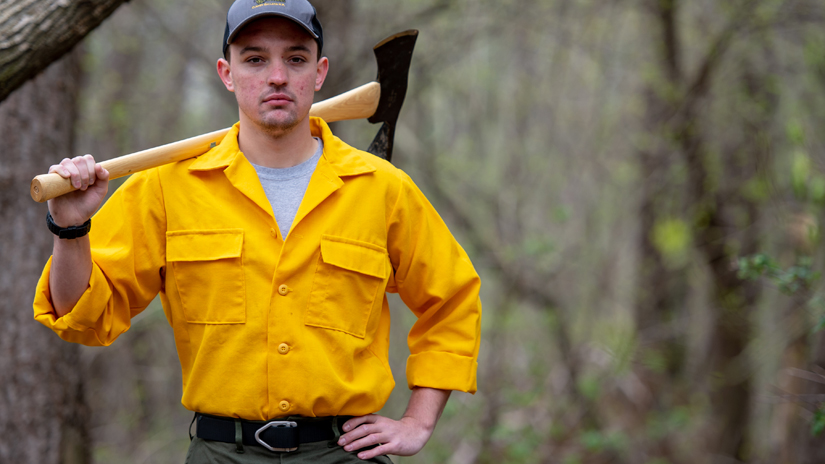 Nate Wilson traces his appreciation of the outdoors back to the hunting trips he took as a young boy with his uncle.

Fast forward and the Keshena native will graduate May 11 from UW-River Falls with a degree in conservation. Soon, he’ll be headed west to Montana to join the front lines fighting wildfires as a forestry technician with Beartooth Ranger District. This will be a little bit like coming home for Nate since he spent the previous two summers working for the U.S. Forest Service as a wildland firefighter.

“The wildfire community is large, but small at the same time,” Nate says. “I see some of the same people year after year. I do sometimes ask myself, how did I, from small town Wisconsin end up all the way out here?”

When Nate was considering colleges, he knew that he didn’t want to be just a number. He visited UWRF and was able to also schedule a one-on-one visit with conservation and environmental planning Professor Eric Sanden.

“Professor Sanden helped outline the program and what kind of things, like internships and other experience, that I’d need to do to build my resume,” he says. “During that visit, something clicked, and I thought, I like this place and want to go here.”

Once on campus, he did things he had never done before.

Nate spent the summer between his freshman and sophomore years interning at Legend Lake Protection Rehabilitation District. It’s a place that he started working at age 17 and he was able to create an internship opportunity. It’s also a lake that he has a keen interest in. Three generations of his family have lived near it. His summer project included managing an invasive species without chemicals.

“We used a DASH unit - Diver Assisted Suction Harvester - to pull the invasive plants out by the root ball,” he says.

He also credits his involvement with the UWRF Resource Management Club for helping him explore career options.

“Resource Management Club gives you the opportunity to network, get field experience and find out what you like and what you don’t like,” he says. “It’s also where I found out about the wildland firefighting class.”

After taking the firefighting class, he applied for summer jobs at ranger stations “anywhere and everywhere.” He ended up starting the summer in Bly, Ore.

“We were given assignments as the fires started lighting up. I was in New Mexico for 14 days. This job is far from being easy. There have been many days where we work 24 hours straight,” Nate adds.

Over the years, Nate’s been given more responsibility and now operates the engine. His job is to get the water where it needs to be, even if that means carrying it on his back with bladder bags.

When asked to reflect on his time at UW-River Falls, his advice to future Falcons is to stay involved and work hard.

“My parents and family members have always been supportive of me and my career choice, which I really appreciate,” Nate says. “It could be 115 degrees and I think, ‘I’m having fun.’ This gives me purpose. I’m using my degree to help people.”