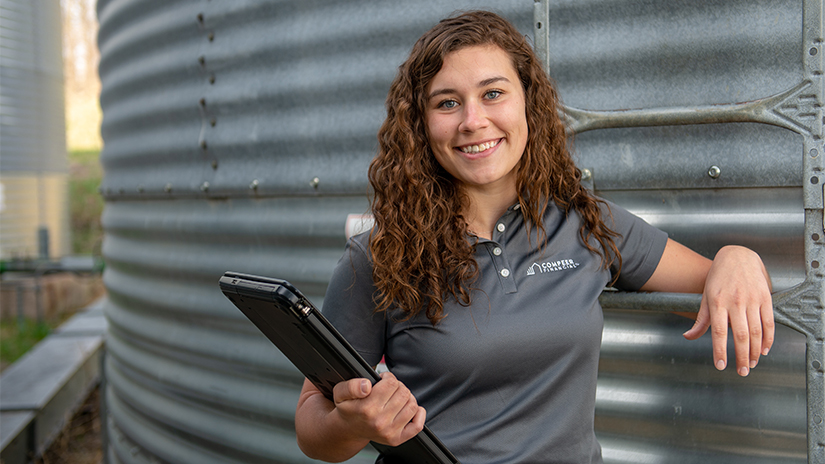 Marissa Koller is proof that you can take a person off the farm, but you can’t take the love of farm life out of a person.

She grew up on a 35-cow dairy farm near Durand and knew the lifestyle well, but she wasn’t sure that’s what she wanted for herself after college.

“Leaving high school, I didn’t necessarily want to be in agriculture, I had had enough of it,” she says.

Marissa originally thought that UW-Madison might be right for her. Being a high school athlete, she’d spent time at basketball and football games on campus.

“I toured UW-Madison and the campus was huge,” she says. “I sat in on a couple of classes and the classes were huge."

Then she paid a visit to UW-River Falls.

“It felt like home,” she explains. “I wouldn’t say I’m an introvert, but I would say that I’m not a complete extrovert, so coming to a place where I felt comfortable from the very beginning was important to me.”

Marissa came to UW-River Falls as an accounting major and agricultural business minor, but the draw to the agriculture community was still there.

“I was missing the agriculture part of my life,” she says. “Agriculture was where my heart was after all.”

In addition to being part of the Honors Program, she was involved in Accounting Society and found her agricultural community in Dairy Club, Agricultural Business and Marketing Society and as the 2018-19 Sweetheart for Alpha Gamma Rho.

Attending a Career Services Networking Social her junior year brought her a step closer to realizing her career goals. At the social, Marissa spoke with a representative of Compeer Financial Services, a Farm Credit Cooperative. This initial contact led her to stop by the Compeer booth at the Career Fair the next day. The person she’d talked with at the networking social told the other Compeer representative that they should talk with Marissa.

“We started talking about available positions and interests and she encouraged me to sign up for an interview the next day,” she explains.

That interview led to Marissa’s name being put into a pool of intern candidates. Three months later, she had another interview and landed a summer internship in Compeer’s Apple Valley, Minn., location.

“I did credit analysis for farmers across the country,” she explains. “I wrote narratives and analyzed risk. I also did annual reviews and a project that assessed the probability of default of the loan portfolios in AgriAccess,” she adds.

A position for a financial associate in credit was available in September, and Marissa was offered the job, with a start date of late May.

In addition to the hands-on experiences in a small-class setting that she had at UW-River Falls, she also credits the resources provided by Career Services with helping her land a job.

“Whether it’s a resume or salary negotiation workshops, the Networking Social or the Career Fair, get the experience,” she says. “I learned so much.”