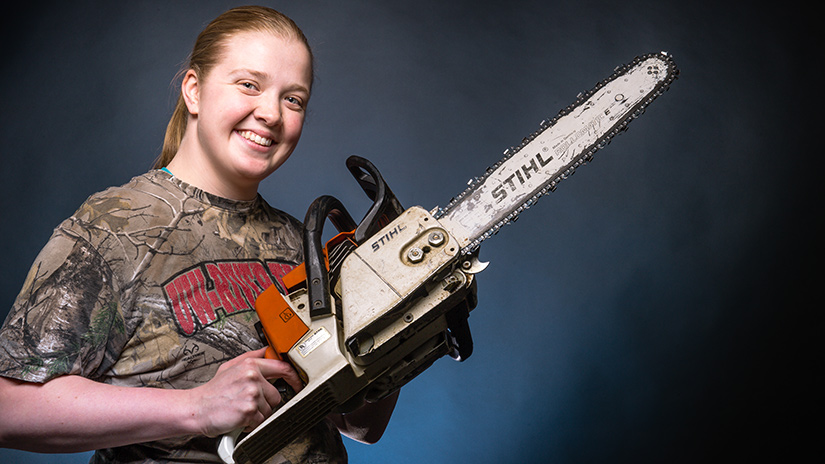 Kennedy Luedeman wasn’t sure how – or when – she was going to end up back in Colorado, but she always knew that’s what she was aiming for.

“I actually vacationed out there [in Steamboat Springs] as a little 12-year old. It was funny because we rented a cabin for two weeks and I still remember, as we were packing up, I stood outside our cabin and said, ‘I’m coming back here,’” she recalls. “I don’t know when and I don’t know how, but I’m coming back. Lo and behold, 10 years later, here I am.”

Kennedy, a Green Bay native, will fulfill her Colorado dreams June 1 when she heads to Steamboat Springs to start her new job as a chainsaw trail crew lead with the Colorado Conservation Corps. She’s graduating from the University of Wisconsin-River Falls with a degree in field biology and a minor in conservation, a natural fit for her new job. While field biology wasn’t always part of her plan, a change in direction freshman year led her to her passion.

“I came to River Falls for the pre-vet program. I wanted to be a vet, more so working with exotics and wildlife rehabilitation,” she says. “I started taking classes for that and I realized it wasn’t really what I wanted to do.”

“That kind of freaked me out,” she explains. “Ever since I was little, I thought I was going to be a vet and I wanted to work with animals. Then I came here, and I just realized it wasn’t for me. I felt kind of unsure about it.”

She spent a few months as a freshman undecided about her next step. Then, with the encouragement of her adviser, she joined the campus Resource Management Club, an organization she now oversees as president.

“I love being outside, camping, hiking, biking, fishing, all of it. My adviser directed me towards that club. He knew I loved being outdoors and he said, ‘you’re a biology major, it’s a pretty easy switch to field biology,’” she says. “Field biology is working more with the conservation aspect, not just typical biology. I switched over and I couldn’t be happier. My parents have even said they see such a difference. Now I go home and I’m talking about trees and the environment.”

Once she settled on a major, Kennedy dove right into her field. She has spent the last few years honing her skills with the Resource Management Club and says the experience she has gained through the extracurricular activity is unmatched.

“I can thank the club for a lot of my experience. Being able to go into an interview and say ‘yes, I have my chainsaw certification, I’ve got my safety certification, and I did that all on my own through the club, that’s huge,” she explains. “Employers in the field of conservation, environmental science, field biology, they like seeing that this person took the time to get the certifications that they need so they don’t have to put them through it. I think it elevates you.”

Kennedy says her leg up on the job market isn’t just due to her club experiences, but that credit is also owed to the UW-River Falls conservation program and its professors.

“I feel like our conservation program is very underestimated. The professors are great at getting you connections. I’ve worked with the Wisconsin DNR (Department of Natural Resources) for the last two summers at a state park by my house [in Green Bay],” she says. “For people in our career, the DNR is the top level. That’s what everyone wants to work for so being able to say that I’ve worked for two summers with the Wisconsin DNR doing trail maintenance at a state park means I’ve got my foot in the door.”

“That job has given me so much valuable experience and that’s been thanks to a lot of the professors here,” she says. “They’ve pointed me in that direction.”

Now, with commencement nearing and a new path ready for blazing, Kennedy is thankful for her slight change in plan four years ago.

“Don’t be scared to try new things. You have no idea what’s in store for you if you don’t try. It sounds cheesy!” she says. “I came here to be a vet. I had it all planned out and then one decision and ‘poof!’ that’s not the plan anymore.”

“That scared me, but I actually enjoy what I’m doing now. I’m passionate about what I’m doing, and I wouldn’t have known that if I would have questioned it or stuck with what was familiar.”