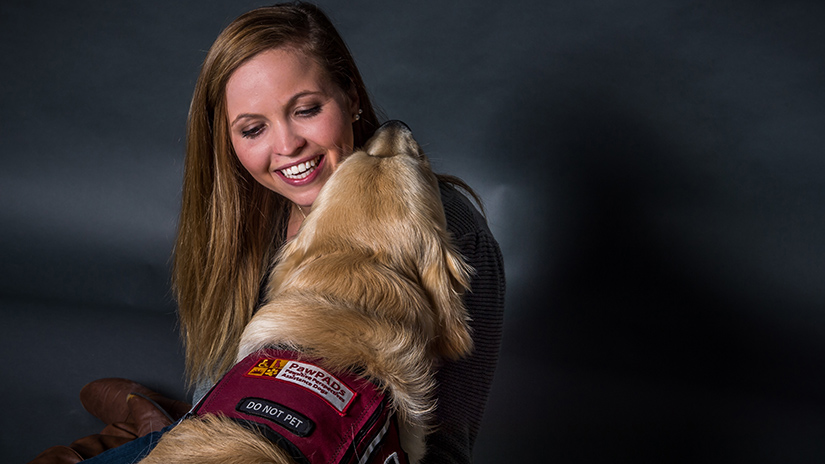 When Kelly Vodra reflects on her time at the University of Wisconsin-River Falls, she’s quick to point out the difference-maker in her education.

“Experiential learning,” she says. “Being hands-on makes you think for yourself, it makes you be creative. It makes you be stressed and push yourself. It’s stressful but that’s what makes you grow.”

That growth, says Kelly, is what helped her land a job before graduation. A psychology major from Stevens Point, she’s employed as a behavioral therapist at Partners in Excellence, an autism therapy center in North St. Paul. Unlike many of her peers who won’t be jumping into their careers until after they walk across the commencement stage, Kelly took the opportunity to get a head start in her field.

“I knew that I wasn’t going to have a full class load this semester, so I didn’t want to just be sitting around doing nothing. I knew that I needed experience in the field, so I started to apply,” she explains.

Her search was short-lived as she was offered her position at Partners in Excellence in November. She worked just a few hours a week during the fall semester but has expanded her role during her final semester of college.

“They were really willing to work with my school schedule. This semester I only have one class, so I’ve been able to get 32 hours a week,” she says. “It feels nice to have a leg up. I’m glad I started when I did so I can just jump right in.”

Kelly’s head start on post-grad life is crucial. In addition to working full-time as a behavioral therapist, she’ll be pursuing her graduate degree in applied behavior analysis online through Ball State University. Her graduate program requires two to three years of clinical hours through a licensed site.

“Luckily, Partners in Excellence has this whole program drawn out for me since you need hours in different areas. Once I start school, I can start the program with them,” she says.

Earning her clinical hours through first-hand work experience falls in line with the experiential learning Kelly has become so fond of at UW-River Falls.

“I think that it’s so beneficial to be able to build up to being hands on,” she says. “It’s about figuring things out for yourself. Employers want to see that you’re able to ask questions but that before you come to them, you’ve tried to figure it out. I think that’s why it’s so important to get experiential learning as an undergrad.”

“I train dogs and I’m working with the rats in undergrad research,” she explains. “I studied abroad in Scotland and that was really influential in becoming independent. I think that shines through now that I have to be independent and design my own hours and make sure that I’m at work each day.”

Earning her master’s degree while simultaneously working in her field will be just the type of “learning while doing” that Kelly loves most – and one she’s had plenty of experience with so far.

“Being on the ADEPT team with the service dogs has to be my favorite class I’ve ever taken here [at UW-River Falls],” she says. “It’s so different and it’s one of those classes where you don’t have tests and you don’t have lectures. It’s a real-world class and you apply it every day and every time you’re out with the dogs. I like that kind of learning.”

Thanks to all that hands-on learning, Kelly says she picked up a few key pieces of wisdom at UW-River Falls, in addition to her newfound independence.

“You kind of find your own place to be here. And once you find that place, expand on it. Push yourself to do that undergrad research on your own, whatever it might be,” she says. “It’s going to open up your world so much so that you can take everything that you’ve learned, and you can pick something that matches who you are.”