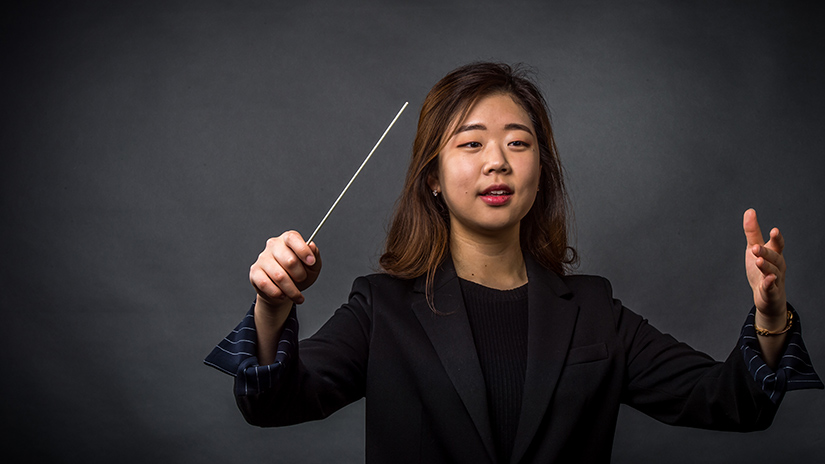 Hye Jeong Kwon’s journey to the University of Wisconsin-River Falls started on the other side of the world. Her mother, a women’s choir, and a UW-River Falls professor each played a role in her path to campus and now, two years later, she’s headed toward the next stop on her journey – graduate school.

“J.W. Park [professor of music] is my adviser. I met him in Korea,” she explains. “He has a summer festival choir called JW Chorale and my mom is in the choir. I joined the choir after her and we met each other for the first time through the choir and he persuaded me to come here and be a music major.”

With Park’s encouragement, Hye Jeong transferred to UW-River Falls from Seoul Women’s University in her hometown of Seoul, South Korea. A double major in Christian and children’s studies in Seoul, Hye Jeong switched her major to music upon arrival at UWRF and her deep love for choral conducting blossomed. After graduation, she’ll pursue a graduate degree in choral conducting at Georgia State University. She won’t just be a student though – Hye Jeong’s been hired as a graduate assistant in the conducting department.

While she says she knows the demands of both graduate school and her assistantship will be challenging, Hye Jeong is excited about the future.

“I’m excited to learn more about choral conducting. When I first came here, I was a vocal performance major,” she says. “I learned about conducting from Dr. Park. Once I discovered it, I discovered my talent and passion.”

Part of that inspiration, she says, stems from the education process in the United States. When asked about the differences between post-graduate education in America and South Korea, Hye Jeong notes that much of the difference lies in the process.

“South Korea usually focuses on the result, not the process. The American education system seems more focused on the process,” she explains. “The result is very important also, but the focus is more on the process and I like that kind of education.”

“If I do my best, really try my hardest, then they [the professors] understand that I put the work into it,” she said. “The end result doesn’t matter quite as much as what you learn from the effort.”