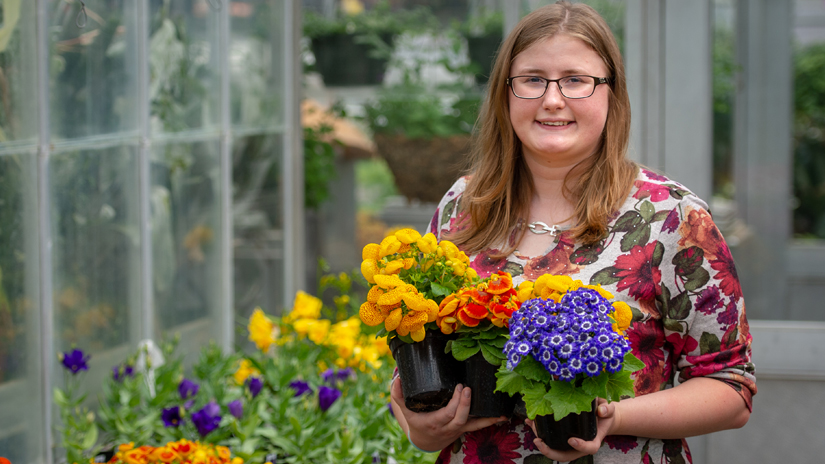 “I like learning and I get nerdy about plants,” she says. “My mom took off a whole year of work to be with me when I was four years old. She has huge gardens all over the place and she taught me a lot.”

The Black River Falls native considered other UW System campuses, but it was the agricultural programs offered at UW-River Falls that sold her on this one.

“I knew I wanted to do something in agriculture, preferably with plants, but I really wasn’t sure,” Emily says. “I actually started out as a crop and soil science major but switched when I met Professor Zlesak in the horticulture program,” she adds.

She took advantage of opportunities she learned about from her professors to land industry-related jobs and internships to compliment what she was studying in the classroom and to build her resume.

Emily’s job at Harrington’s Greenhouse in Ellsworth helped her to learn more about the retail side of horticulture and her work at the River Falls location of Eurofins BioDiagnostics, Inc., provided experience in a lab.

“It was really nice because when it was all dreary outside in January, I’d be in the greenhouse with all the pretty flowers,” she says. “At Eurofins BioDiagnostics, I did germination tests, which is a legal requirement to sell seed.”

An internship at Northern Family Farms in Merrillan also helped her put what she’d learned on campus into day-to-day practice.

“I learned about propagation and pruning trees and shrubs,” Emily says. “I did a trial to compare the effects of a nutrient applied by spray or drench on the rooting of 30 different types of landscape plants.”

The industry experience and networking paid off. When Emily graduates May 11, she will be working full-time as a grower/propagator for the Cottage Grove, Minn., location of Bailey Nurseries. It’s a job she was doing part-time while still finishing her remaining coursework.

“I work in the greenhouses to make the plants happy,” Emily explains. “So, when it’s hot, you need to have the vents and ridges open and manipulate them based on how windy or sunny it is and give the plants water and fertilizer if they need it.”

In her role, Emily will also be looking out for pests and anything else that can impact plant health.

“There are so many things that I can do in horticulture,” she says. “My favorite part is plant health.”

When she’s not busy working in the greenhouse, Emily serves as treasurer of Pi Alpha Xi, the honorary society for horticulture. She also likes to fish and plays both acoustic and electric guitar.

As she looks back on her time on campus, Emily’s proud of how she challenged herself to get out of her comfort zone.

“It was a big move for me, coming from a small town,” she says. “I was away from my family and friends. I didn’t have any friends from my high school graduating class that came to this college, either. I learned to put myself out there and be independent.”