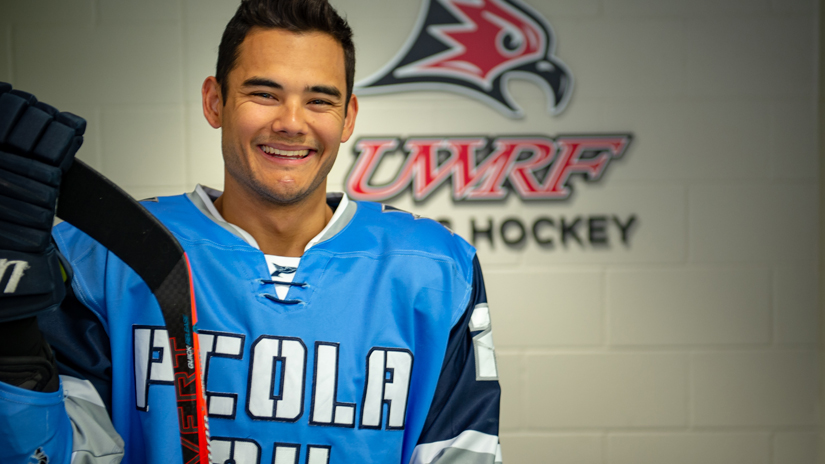 Eddie Matsushima’s path to UW-River Falls was a little different than most students. He played three years of junior hockey prior to setting foot on campus as a double major in business administration and exercise sport science. The Verona native thinks that coming to campus a little older was an advantage for him.

“Honestly, it was easier. I knew what I wanted to do and came in with a plan,” he says. “At 18, I don’t think that I would have been as prepared to take full advantage of everything UW-River Falls has to offer.”

Eddie was recruited to play hockey by several colleges, but he knew UW-River Falls was the best fit for him after he toured campus.

“I came in with the goal to play hockey, but also come out with a good education,” he says. “The biggest thing was that I could do a double major in business administration and exercise sport science and finish in four years.”

Four years later, Eddie is living his dream of playing professional hockey. After the Falcon hockey season ended, he received calls from several professional team scouts. He was snapped up by the Pensacola Flyers of the Southern Professional Hockey League. He hopes to keep moving up the ranks and eventually play in the National Hockey League. If that happens, he knows it won’t last forever.

“With hockey you never know what’s going to happen. The goal is to play in the NHL, but the pool gets smaller and smaller with each level you go up,” he says. “I definitely wanted to get my education and UW-River Falls provided the opportunity for me to do that.”

Growing up as an athlete in high school and college, Eddie was doing a lot of strength training and has a dream of one day opening his own gym.

“I fell in love with training and nutrition,” he says. “Since I want to own my own gym someday, having the business background, along with exercise and sports science, will help.”

When he was off the rink, Eddie was involved in many extracurricular activities on campus. In fact, he even started one of his own, The Barbell Club.

As a freshman, Eddie also competed in the Innovation Challenge, a competition where undergraduates and graduates develop an idea into a viable business. He saw a need to create a more convenient, portable method for transporting powdered protein. He developed a prototype for EZ Pocket and won the campus competition. He went on to finish third at the state competition and also had the opportunity to compete in the International Business Model Competition (IBMC).

“I was the only freshman at IBMC,” he explains. “It was so cool to look the other colleges that were competing - Brigham Young University, Harvard, Yale, Stanford, University of Mexico -and to see UW-River Falls among them. It was an unbelievable experience.”

After graduation on May 11, Eddie will spend the off-season training in Wisconsin. He looks back on his time on campus and encourages students to get involved.

“People sometimes don’t realize or understand the opportunities that UW-River Falls has to offer, so much more than just classes,” he says. “Get involved and have fun.”